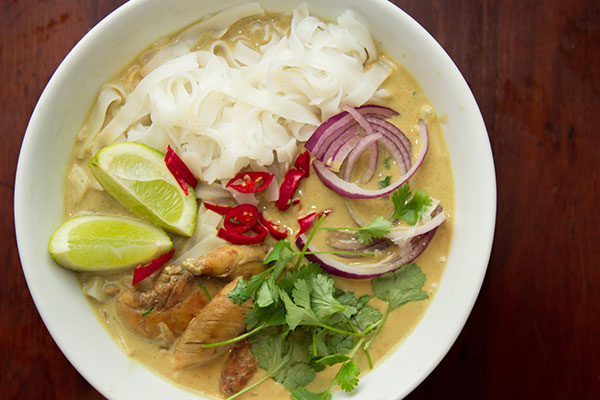 My mother would often quip that “necessity is the mother of invention”. I vehemently hated this phrase when I was younger, mostly because it meant things weren’t going my way and a novel solution was needed. That old idiom came to mind one evening when my pantry was bereft of spices and I was unwilling (read: too poor) to stock up on the numerous seasonings I thought were necessary for a desperately craved curry. Instead, I embraced the magic spice that is garam masala: a wicked combination of cardamon, cloves, cinnamon, fennel, cumin, ginger, black pepper, ground coriander seeds, nutmeg and cayenne pepper — all in one pack! Though it’s often added in the later stages of cooking to retain its flavour, I pounced on its complexity and used it to coat meat, along with salt and sugar. Rice noodles bulk out the dish, and fresh coriander and lime cut through the creaminess. Throw in a handful of frozen beans in the final five minutes for an extra pop of colour. So here it is, sitting comfortably between the extremes of a soup and a curry: my sinus-cleansing necessity-is-the-mother-of-invention coconut chicken.

01 | Combine the garam masala, salt, and white sugar. Play around with the quantities until you strike the desired balance between spicy, salty, and sweet. Chop the chicken into 5cm-long chunks and toss through the spice mix until well coated.

02 | Heat the oil in a large non-stick frypan over a medium heat. Add the chicken and cook for five minutes, stirring frequently.

03 | Meanwhile, fill a large pot with water and bring to the boil. Add the rice noodles. Cook until tender, drain and rinse with cold water to prevent them sticking.

04 | Add the coconut milk, chicken stock and turmeric to the chicken. Stir well to combine. Add the red onion, keeping a little aside to use as a garnish. Turn the heat up until the liquid is almost boiling, then reduce the heat to a gentle simmer. Cook for 10 —15 minutes, until the chicken is cooked through. Taste it as you go and more garam masala if needed.

05 | Just before serving, add half the chillis to the pan. Divide the rice noodles between four bowls. Top with the coconut chicken, the reserved red onion and chillis, coriander, and a few lime wedges.