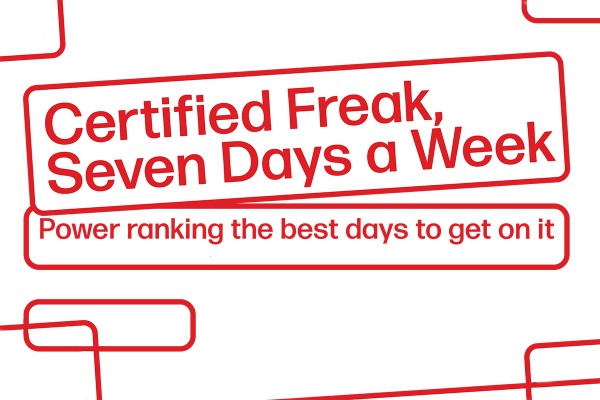 Power ranking the best days to get on it

Being a student is great for many reasons, one of which is that every day of the week is an excuse to party. After extensive research (a few years of study), Critic Te Arohi has compiled an official ranking of the best nights of the week to go out. Grasp your fleeting youth with both hands, and make the most of it.

Going out on a Monday always feels slightly morally incorrect and illegal. No one really goes out on a Monday at all, and bars close super early. But guess what? Time is a made up concept, and anyone who believes otherwise is a sheep. Due to the emptiness of town and the early closure of bars, Mondays are more strictly reserved for quiet ones in with the flatties. Perhaps a rosé over pasta for dinner with the girls, or a pint or 12 with the boys. Mondays are the night you can create your own meaning, since there’s no designated event or party on. Celebrating the start of a new week? Have a drink. Dreading the start of a new week? Have several drinks. There is nothing wrong with a Billy Mav with your readings, but drinking on a Monday does carry with it the same sort of liminal vibes as drinking at an airport at 11am. Technically fine, but concerning if it’s a regular occurrence.

Tuesdays are always shit. There’s no cause to celebrate because, unlike Monday, it’s not even the start of something new. There’s also not a decent enough amount of time that has passed in the week to celebrate being almost done. Much like your Tinder root or a BCom, Tuesdays are just a whole lot of nothing. They leave you feeling unfulfilled and empty. Yeah, sure, the bars in town might be a little livelier, but overall, it’s just not worth it. Instead, spend your Tuesday hunkering down and catching up on work or uni so you can prepare for the rest of the week. You’ve got to have at least one day off, and Tuesday is a good shout. Wednesday and Monday both have much better perks.

Unpopular opinion, but Wednesdays are in fact the best night of the week to go out. On a Wednesday, there is always something decently fun on that you and your mates can go to and experience feelings of camaraderie, like pub quizzes. Not only this, but the events that are on facilitate the perfect environment for getting up to some absolutely mischievous antics. Wednesdays are tumultuous as fuck; it’s the perfect time to cause some mid-week chaos, the kind of chaos you will tell your grandkids about. It’s hump day, and it’s far enough through the week to feel like you’ve probably done enough work to have some well deserved partying. Wednesdays are also home to Pint Night - which further reinforces the fact that Wednesdays are the best nights. Live music and cheap alcohol? It’s the best combination possible.

Thursdays have great potential. It’s pretty much the weekend, so there’s no need to feel bad about getting on the piss, but it’s also close enough to Monday to make it feel like you deserve it. They seem to be popular amongst the younger cohorts (first and second years), but overall, Thursdays are somewhat average. This might just be because they’re in the middle of the week, so they have to face off against the glory of a midweek rager and a weekend bender. Not an easy place to be. This leaves Thursday feeling a bit like a store-brand Saturday, and the only places open are usually Subs and DSC. There are usually gigs and Jazz Nights at Pequeño for those of you who are classier or just older. It’s a day more suited to BYO or casual drinks, and should be spent with Dave from Maharajas, or over pints at the Baa Bar, or at Woof. It’s acceptable to get somewhat wasted, but isn’t worth blacking out over. Thursdays are great if you’re a BA though, because you have no Friday classes. Suck on that.

Without a doubt, Friday is the best weekend night to go out. There’s a reason Katy Perry wrote a song about it. So did Rebecca Black, if you recall. The beautiful thing about going out on a Friday is that it makes your weekends feel longer, because you’re dusty on Saturday, so it feels like you have a whole extra day. And even though Fridays have a lot to live up to, they still carry their weight. There’s a lot of pressure on a Friday to be this great, week-ending, let-loosing celebration, and honestly, they manage to pull it off. Town pops off. Bars are minging. Parties are always better because people are blowing off steam from a long hard week. Fridays are always unhinged and chaotic, and with absolutely zero pressure to do anything the next day, they’re more fun and spontaneous than any other day of the week.

Like Friday, Saturday has a lot of pressure riding on it. For some reason, Saturdays have become society’s designated ‘going out’ night, but at this point, there is so much riding on them that they’ve buckled under the pressure. With a Friday, much of the day is taken up by work, eagerly waiting for the clock to hit five (or three, or two) so you can go to the pub and clock off. On a Saturday, likely already nursing the consequences of Friday, you have all day to consider whether or not you’re ready to go hard again, and with none of the payoff of having just finished something big. There’s always events on, there’s always something to do and there’s always an expectation, but Saturdays are far more suited to day-drinking than night-drinking. If you have all day to kill, why wait until five to get going? You’ll probably be tapped out by then, anyway, and there’s no need to stay out as late if you’ve just done that the night before. With our current treatment of Saturday, it’s completely overrated. A societal shift could change that, though, and help it live up to its potential. For now, it’s being overshadowed by its younger sister, Friday.

Sunday is the eldest weekend child. Just like any eldest, it’s been given the short end of the stick for years, and is ready to let loose. And there’s so much to do. Nobody expects a Sunday rager, and for good reason: Monday looms like an evil stepmother. Sunday nights are not the night to go hard, but like Saturday, the midday Sunday drink is criminally underrated. It’s an ideal brunch day or the perfect day to go have a few cold ones while watching sports or whatever. It’s also the only day of the week on which the Catholic Church will give you free booze, which is the only time they’ve been right about anything. God had this one nailed down from the start: Sunday is for rest.