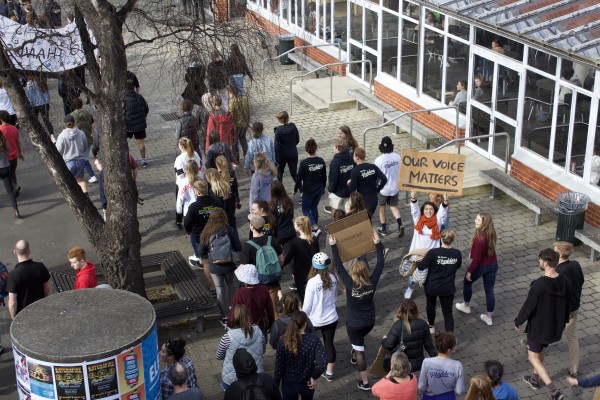 Critic has recently received several ‘Letters to the Editor’ criticising the OUSA Executive, particularly President Hugh Baird, for not taking a stance on some of the year’s most pressing issues. The ten members of the Exec have been inundated with a disproportionately large amount of issues that executive bodies of old would have immediately spoken out either in support or opposition of, not least the plans to implement 60 CCTV cameras in North Dunedin; the ongoing Management of Change process undertaken for the Division of the Humanities (causing at least 18 redundancies); the Support Services Review (which the Tertiary Education Union believe will cause in excess of 200 redundancies); the enormous cuts to the Department of Physical Education; the upcoming General Election. As one of the letters quite rightly states, “he [Hugh] should speak up before his inaudibility and lack of action becomes his legacy.”

This silence is especially concerning when one considers that the ‘Hugh Baird for President’ ticket, in which Baird ran alongside successful Admin VP candidate William Guy, claimed that the rights of students were being abrogated by the university and that, if elected, they would “strongly oppose” any initiatives from the university that continue this trend. Unfortunately, this pledge has not been followed through in any meaningful way.

Anything that prompts someone to actually write a letter to Lucy and myself complaining about an issue is an indicator of just how disillusioned people are becoming at the silence from their elected representatives.

With it being election year, the need for a principled stance is even more necessary in light of the political disillusionment among the 18-24 age cohort and particularly the pathetic enrolment rate (48 percent) of this group in the North Dunedin electorate; which Admin VP William Guy, to his credit, noted as “making us one of worst performing electorates in the country,” in last week’s President’s column. We need associations like OUSA to be the mouthpiece of the students, and they do a disservice to the student body when they fail to do so.

By no means can each of this year’s Executive be accused of being on this path because, to their credit, some have been vocal in their opposition to the laissez-faire leadership of the now apolitical OUSA (the most vocal of whom are arguably Colleges Officer James Heath, Education Officer Bryn Jenkins, and perhaps Postgraduate Officer Lucy Northwood at times too).

In 2016, a year plagued by incessant conflict, and during which rumours of a coup to oust President Laura Harris arose as early as late May, ‘execrable’ was ironically at times the best word to describe it (for reasons that I don’t have space to go into but have been well documented). Looking back on what was achieved that year, one of my main criticisms was that few substantial election pledges were getting acted upon because of the incessant conflict that, if not always overt, was bubbling under the surface and disrupting what could have been a very successful year had the individuals worked together throughout.

Though ‘execrable’ is the word that describes the executive of 2016, it would be unfair to describe this year’s group as being as dysfunctional and conflict-ridden. On the other hand, it would probably be a little too kind to describe them as simply ‘inaudible’; and with no comparatively dire conflict plaguing the group thus far, there are very few excuses to explain away the deafening silence coming from those we elected...