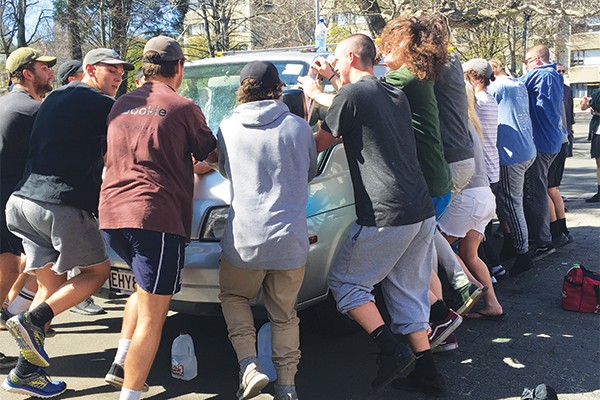 On Tuesday OUSA President Hugh Baird hosted a competition to give away the old OUSA van to an assiduous student. Thirty students signed up to spend hours standing on the union lawn touching the van. Competitors were allowed two toilet breaks at times of their choosing. They weren’t allowed any food, but were allowed drink bottles. The last to leave would win the van.

But wait – they didn’t win it forever, just for a year. The OUSA student executive weren’t properly consulted about giving away the van, which only had 33,000 kilometres on the clock and was valued at around $8000. They protested that the van is an asset OUSA would be irresponsible to give away. So Hugh, who organised the event, hastily changed the prize to merely allow a student to drive the van for a year, under a lease. The OUSA branding on the side of the van would be removed.

A van is an expensive vehicle to run. The average student probably wouldn’t be interested in ‘owning’ it unless they were able to live in it, at least in the short-term. If nothing else, you’d be silly to have a van and not go camping in it. So OUSA is going to be getting a van back in a year’s time that has likely been lived in, slept in, had sex in, and whatever else the new driver and their friends choose to do with it over the next year.

The rules for the competition weren’t properly thought through or outlined for the participants. One competitor had a bad back, and was eliminated from the competition because she couldn’t hold a prone bridge (plank) position for a long time. It was 9.5 hours into the competition. Perhaps if she’d been told at the outset that she’d have to take part in these kinds of physical challenges, she wouldn’t have participated.

The competition was a strange mix of endurance and other physical and mental feats, including a quiz, a running race, and a blind guess at the number of kilometres on the van’s metre. Hugh told me he thought the competition could go for “three or four hours,” but he underestimated the participants. The nature of the competition seemed to blur more as the night went on and the competitors’ persistence was revealed. What they had thought was a test of their stubbornness turned out to be an arbitrary dishing out of tasks by a host who apparently wanted to get the thing over with. They finished at 10:30pm, ten and a half hours after it started.

One student told me he found the van giveaway “distasteful” after the recent stories of violent and strange flat initiation rituals in Dunedin. OUSA gave away a prize to a member of one of the poorest populations in the country (students) for pointless endurance and mild humiliation in the week after students had been goaded into doing cruel and unusual tasks at the hands of other students.

Joel MacManus took over policing the competition while Baird was away at an exec meeting. He said, “It was heartbreaking every time I had to let someone go,” and said every person who left looked visibly annoyed. And with good reason: none of the competitors actually lost because they stopped touching the van.

What does OUSA get out of this? Nothing. The stunt didn’t provide a service for students. It didn’t make any money for OUSA, or promote the brand in a meaningful way. Nobody enjoyed it. Almost everyone who participated left exhausted and dejected. No one even won a van.