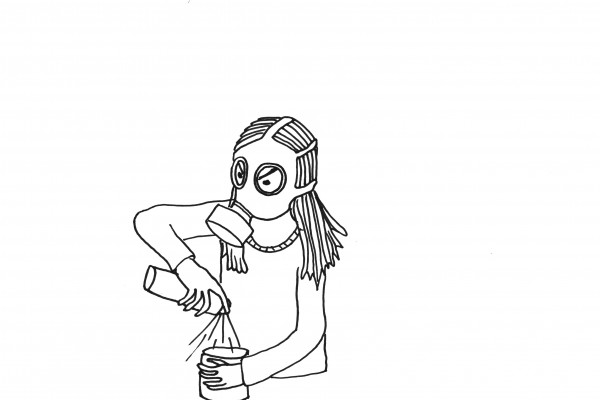 Nicole had recovered from her attack. The deodorant, once rinsed from her eyes and throat, didn’t seem to have done permanent damage. Her vision had been blurry for a couple of days, and her breathing tight, but now she was ok. Ok, except that she could not get the smell out of her room – the claggy, clinging, cloistering smell of the Lynx deodorant was in her carpet, her clothes, everywhere. She’d cleaned and cleaned but it stuck around. Now she wanted revenge.

Almost everyone in the boarding house had gone home for the mid-year break – everyone except Nicole and the guy. They avoided each other. She never saw him, only smelt his deodorant. One night she woke suddenly, convinced she had heard a single, tiny spurt of spray coming through the keyhole in her door. She couldn’t tell if the smell was stronger or if it was just the regular smell of her room now.

Then inspiration struck. There was an extreme weather warning - snow, gales, freezing temperatures - so she went out to get supplies. She stocked up on food, water containers (in case the pipes froze), and bought ten canisters of Lynx deodorant for men and a gas mask.

She went home, filled her water containers, took all her food to her room, and waited. That night the weather hit. It was colder than it had been in years. Minus 10. The pipes froze. The water stopped. Snow heaped up against the doors so they couldn’t be opened. Nicole waited till 3am to strap on her gas mask, sneak into the kitchen, and get to work.

She started with the canned food. She found she could open them a little way with a can opener and spray the deodorant in for a few seconds. She shook the contents round a bit, sprayed a bit more, then put the can back in place. Next came the dry food. She did her best to make it look as though nothing had happened by spraying the cereal a bit, shaking it up, spraying again, shaking it up. Noodle packets, muesli bars, and sachets of food needed to be slit open and squirted into. The milk and juice in the fridge were easier. She was worried that the deodorant would show up in his clear plastic bottles of emergency water, but it didn’t. The fruit, vegetables, and meat looked unaffected by their perfumed glaze.

The only evidence was the smell. The awful, choking smell. Even through her gasmask Nicole thought she could feel herself retching. She opened the windows and a blast of icy air came through. She left the windows open for a full hour to air out the room. Finally she closed the windows and went back to her room, where she took off her gasmask and went to sleep.

She woke in the morning to a scream. The guy was fond of swigging milk from the bottle. She heard him start to panic as he tried the frozen taps. As she had predicted, he went to the bottled water and juice next, finding them all poisoned. As he stumbled round, Nicole slipped out of her bedroom door and into his bedroom, where she picked up his cell phone and laptop, then rushed back into her room to close the door. No outside contact for you, Mr Man. She locked her door and made herself a cup of tea at her kitchenette, then went back to bed, smiling, waiting for him to bang on her door pleading for help. She looked forward to an entertaining couple of days, trapped in the snow.