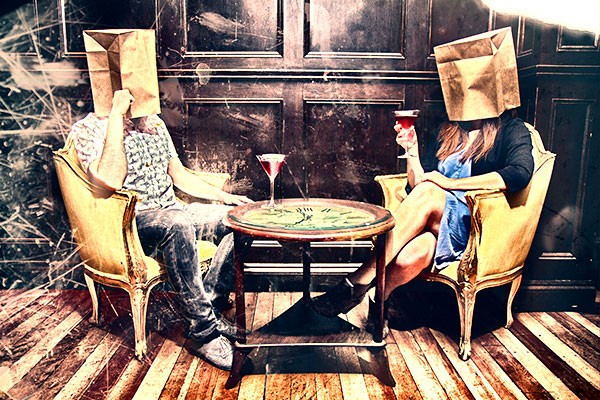 I just want to get one thing straight; I only agreed to this date because my flat mates are away and i’m too povo to buy my own food.

I’ll leave out the hour beforehand, what time i arrived, blah blah. Does anyone else get really sick of reading that shit every week?

The night was coming to an end so my date and I left the bar. I was thinking of going home alone, but it was like 10 degrees outside so some naked spooning could have saved me from hypothermia. Just safety precautions.

I’d had this weird feeling in my gutt all night but I assumed it was due to the fact that I had been living on cheese toasties and le snacks all week.

Things started getting hot and heavy when we got into my room. Not the temperature, it was still cold as f*ck. We were making out and i felt this massive stabbing pain in my gut. I dropped to my knees and curled in a ball (not in a kinky way) and told my date to call an ambulance. I think he assumed I was joking because he just stood there for a few seconds staring at me (was this weirdly turning him on?)

It turned out I had an appendicitis and had to get my appendix removed that night.

My date was still there when I got out and seemed really concerned about how I was doing. He was a lovely guy. My flat mates eventually came and my date left, not without a nice kiss on the cheek. I’m glad I got his number, we have been texting ever since and making great use of the new IOS emojis.

I’m sorry I couldn’t give you guys a kinkier story, but thank you to the 123 people who upvoted my yik yak about the date; my yakarma is booming.

I am doing fine now, and think I will invite my date over for round two sometime soon. Thanks to Critic and Di Lusso, I will remember you everytime I look at this awful scar xx

I have never really been one for blind dates, or dates in general, but of course I’m going to jump at the chance of a $50 bar tab.

I decided to forego the tradition of getting absolutely smashed beforehand. Not only am I too poor, but I’ve been told I’m not exactly a gentleman after a few Diesels.

I arrived at the bar early and engaged in some awkward chat with a reasonably good looking bartender. I soon realised that she had nothing on my date. Woah, what a 10.

It was a pretty cold night and my date decided we should sit outside, spaz. We sat by the fire and edged closer throughout the night, I’m not going to complain. We engaged in general small talk until we found some common ground, we both study politics. I was nervous to ask which party she supported incase I got some spiel about my boy Johnny K being a twat. The amount of shit yarns I hear about that on Facebook is too many.

I don’t even know how to explain the rest. It was kind of fucked. Not literally unfortunately. I was literally about to get it in and she dropped to the floor in some kind of stop, drop, and roll recovery position. She kind of screamed at me to call and ambulance, I just stood there waiting for a please but she’s obviously not the best at manners.

We headed to the hospital and she ended up getting her appendix out. I thought of leaving, but the hospital warmer than my flat. She got out and four girls wearing stripped t-shirts arrived, this was obviously her crew.

I gave her a kiss on the cheek while she was still kind of dosey and then left. We’ve been texting quite a bit ever since, I think she may actually be a pretty cool chick when she isn’t dying.

Thanks Critic, for the bar tab anyway.