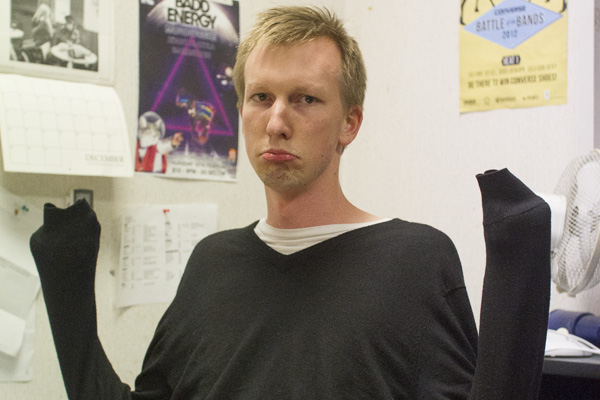 Hi. My name is Sam, and I’m not the editor of Critic.

Callum Fredric, the real editor, was recently involved in a tragic accident. Mere days after recklessly writing “YOLO” as his official religion on the census, Callum lost both of his miniature hands in a freak alligator-feeding accident. He was unable to write the editorial this week. Because he has no hands.

I was drafted in at the eleventh hour to write this editorial and, to be honest, I’m struggling. Writing the Critic editorial is a monumental responsibility. Previous editors have tackled such weighty issues as misuse of the word “dialogue,” and whether there should be a large black penis in the Octagon.

I cast around the windswept expanses of my head for inspiration, but beyond some inane pop-culture references and an inappropriately Freudian analysis of certain OUSA figures that some might say bordered on defamation, I had nothing.

So instead, I’m going to talk about Callum’s hands.

Callum is a larger-than-life figure. Picture life itself, in all its scope and magnitude. Callum is larger than that. But his hands were very petite. They dangled impotently from the end of his arms, like little dandelions, or toothpaste when you squeeze it from the end of the tube. They were so small they could fit almost anywhere, a fact to which certain Critic employees will happily attest.

So the alligator enjoyed a very meagre and, as it turns out, very expensive meal. The size – or lack thereof – of Callum’s hands was the only thing chaining him to the realm of us mere mortals. For as long as Callum could remember, his hands had held him back. Even walking into the Critic office every day, the door adorned with the image of two massive mitts, was enough to send him into a fugue of introspection and self-doubt. And so, with the loss of his hands comes the loss of his restraint. Once his new badass hooks are fitted and he demonically taps out his next editorial, this page will be devoid of its characteristic modesty and self-awareness.

When you return after the break, you will witness a new Critic. This new Critic will take no prisoners in its quest for megalomaniacal domination over the student media world. Callum’s hands were his anchor, his moral compass, a permanent reminder of his humanity.

And that fucking alligator ate them.
This article first appeared in Issue 5, 2013.
Posted 6:30pm Sunday 24th March 2013 by Sam McChesney.