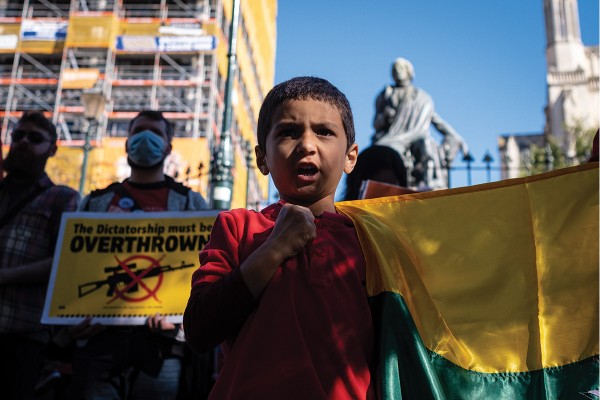 “Fear on Both Sides”: Students and Community March in Support of Burmese People

Serious news with no joke in the subtitle. Give a shit ya’ll.

On Saturday 13 March, 60 people walked from the Train Station to Octagon in solidarity with the people of Myanmar. The mix of students and community members gave speeches and protested the military coup that took place in Myanmar on the first of February.

Eileen Corcoran of Radio One was at the march, and spoke to attendants. Amidst chants of “what do we want? —Democracy, democracy,” a Burmese woman said that people were there to show solidarity. “We are far from home,” she said “and have the privilege of no coup, and no Covid. Back home, people have both.”

“The Burmese people in Myanmar,” said one of the organizers, “are taking to the streets by the thousands to voice their dissent.” As the military fires into the crowd, protesters are choosing death over dictatorship.

Mhairi Mackenzie-Everitt, OUSA’s Political Representative, said that not attending the march was a non-option. “We represent the students of Otago University,” she said “and I think every single one of them supports this. It’s not an option for us not to be here.”

Another student, Sophie, said solemnly that “the least we can do is be here.” Bharhav, from the Otago Postgraduate Students’ Association said that “we are here to support democracy of every kind, and protest dictatorship.”

In a speech at the protest, Labour MP for Taeri Ingrid Leary defended former State Counsellor Aung San Suu Kyi of Myanmar, asking those that sought to vilify her actions to understand more deeply the situation she had been in as leader. Under Suu Kyi’s rule, Myanmar engaged in the genocide of the Rohingya peoples.

As another protester explained, the ever-looming military presence impacted her decisions. “Like a relationship status,” they explained, “it’s complicated. You have to look at the history to understand.”

This is not the first coup in Myanmar’s history. As the protester described, it is the latest rumble in a rocky relationship between a powerful military and an equally powerful popular desire for democracy.

The protester explained that Aung San Suu Kyi might have struck deals with the military to hold onto some semblance of democratic rule, which is perhaps why she defended the genocide. Ingrid said that while there was “no doubt” that these abhorrences occurred, the country was, overall, “moving in the direction of democracy” prior to the coup.

“To hold Aung San Suu Kyi solely responsible for the genocide,” said Ingrid, “is unfair”, seeing as the democratically-elected government was “still ostensibly under the control of the military”.

The military allowed a constitution to be passed in 2008 after decades of ratification, and were then lost in a landslide democratic victory — twice in a row.

“The military is in fear of losing power, after tasting defeat in 2015 and 2020,” said a protester, “and the people are in fear of being under military control again, now that they have tasted freedom. This is fueled by fear on both sides.”

It’s like a bully on a playground explained the protester. When you start to beat him at his own game, he calls you a cheater and flips the table. “Except in this case the bully has all the guns, and [has] hired half the teachers at the school.”

The student community presence downtown on Saturday sought to bring this issue to a wider audience. A woman explained that people in Myanmar are cut off from the outside of the world, seeing only statements issued by the UN rather than tangible action.

“We need action, not statements,” she said, “we need to let people know that they are not alone.”