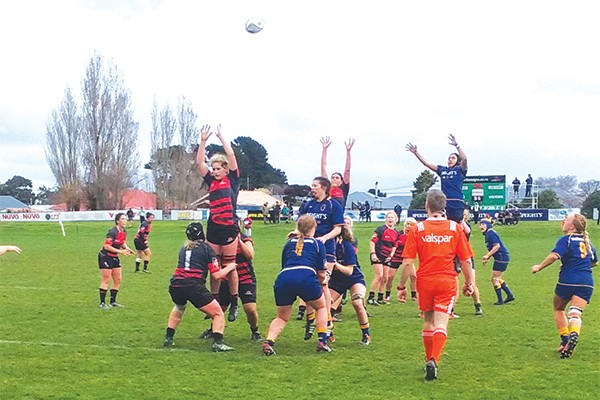 The provincial women’s rugby competition, the Farah Palmer Cup, kicked off last week. The Otago Spirit team took on Canterbury at Linfield Park in Christchurch at noon on Sunday the 3rd. Fortunately the morning rain had cleared by the time the game started. Supporters packed the sideline, including Black Fern Kendra Cocksedge, who attended with the Women’s World Cup trophy.

Overall it was a good game between two feisty teams, but for the majority of the game Canterbury seemed to have the upper hand. The first half was a tight affair; while Canterbury seemed to retain most of the possession, Otago’s defence was impeccable, making it extremely difficult for Canterbury to break through. The wet conditions were also playing havoc, and Canterbury made some great passages of play that were stalled by handling errors caused by a wet and slippery ball. Canterbury seemed to be dominating, but when Otago did have the ball they pulled off some beautiful moves. Otago’s fire really shone through in the last minutes of the first half when they executed an excellent passage of play, making it down into Canterbury’s half and close to the line, but were unable to finish it off. The first half finished with Canterbury leading by three points and the terse supporters wondering which way this close game would go.

Unfortunately for Otago, the Canterbury women came out firing in the second half and were eventually able to break Otago’s previously impenetrable defence. Hooker Rebecca Todd dotted the ball down, but, with an unsuccessful conversion from Liv McGoverne, Canterbury was only ahead 8-0. Canterbury continued to dominate and, at 21 minutes to go, their number 8, Nicole Purdom, crossed the line again, and a successful conversion from Charntay Poko brought the score to 15-0. Otago then had another close call as Canterbury’s Taylor Curtis busted her way down the wing, but the strong defenders from Otago soon put a stop to that. Substitutions from the bench saw Kiana Waretau, Tegan Hollows and Lauren Tye come on from Otago, making powerful impact from the bench. However, it wasn’t enough as the Canterbury number 16, Nina Poletti, spotted a gap in the Otago defence and scored Canterbury’s third try.

With 15 minutes to go, Otago’s fire began building again, but it was too late for them to get the win.  However, they had their foot on the throttle now and weren’t letting up. A great kick down the wing by Kilistiina Moata’ane from Otago and a subsequent penalty against Canterbury brought Otago close to the line, but a sneaky intercept saw a turn-over. However, the Otago team were in their element now. A great hit up from second-five Greer Muir and a pop up to Sheree Hume, who then managed to put Cheyenne Cunningham in the gap that had just opened up, saw Otago get their try, with a successful conversion by Sheree. The final score was 20-7 to the Canterbury women.