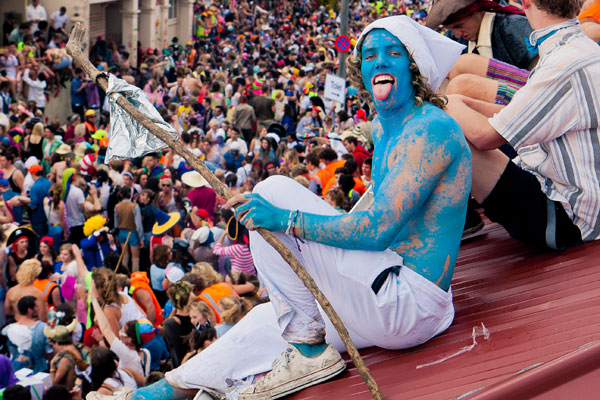 Everyone’s favourite keg party took place Saturday March 24. Critic, along with 6,000 other partygoers, was there covering the drunkenness and debauchery.

Proving to John Key that students do occasionally get out of bed before 7.30 at night, a raucous though mostly friendly crew of partygoers kicked off around 5.30am on Saturday and partied on until 6pm that evening.

Spirits were high as a crowd of between 4,000 and 6,000 people (depending on which media outlet you rely on) flocked to Hyde St. Many partygoers came from outside the student population, from as far afield as Blenheim. Critic thought that was impressive until it found two tourists from Singapore wandering amidst the crowds. Oversized cameras in hand and practical shoes on foot, the pair seemed impressed by the event, admitting that such a thing had “never” been seen in Singapore.

Amidst the chaos, OUSA, the Police, University Staff, the DCC, Campus Watch, Red Frogs, St John’s Ambulance Service and Student Health all pitched in to babysit the revelers. Any potential for mortal peril was narrowly avoided with a combination of sausages, plastic-tasting water, portaloos and a first aid tend.

As always, the costumes were one of the day’s highlights. “My favourites were Cookie Monster and Oscar the Grouch in his little bin,” said OUSA President Logan Edgar, revealing himself to be a die-hard Sesame Street fan, “but I also really liked my costume.” Edgar attended the event dressed as his self-confessed idol, Barack Obama. An abundance of Caucasian ancestry did not prevent our pale president from cultivating a chocolate-brown skin tone for the day in order to emulate his silver-tongued hero.

Thought not without mishap, the day was notable for the lack of fire and glass that has marred the Keg Party on previous years. This was the most impressive aspect of the event for Edgar, which he says shows that “students can band together and get on board with positive initiatives like the glass ban. It was interesting, because a lot of people told us it couldn’t be done and I think we showed that it could.”

Vice-Chancellor Harlene Hayne, who spent most of the day on Hyde Street, agreed that the majority of students contributed to a positive atmosphere. “I was absolutely delighted by the students’ costumes. Throughout the day I met literally dozens and dozens of bright, polite, and friendly students who were on Hyde Street to have a good time and who were genuinely grateful for the opportunity to participate in such an amazing event.”

But, there’s always a “but”. Especially where scarfies and kegs are involved. “Like most things, however, it is always fun until someone gets hurt or something gets broken,” Hayne said. “As the day wore on, the damage and injury due to severe alcohol intoxication started to climb. Some of the injured students that I dealt with were not particularly drunk; they were the victims of other people’s drunken behaviour. Unfortunately, however, many of the students I dealt with were very, very drunk. Like so many others who assisted during the event, I held buckets while students vomited and covered people who were passed out on the grass or in parking lots.”

A number of students were taken to hospital with 164 people presenting to the hospital’s emergency department on Saturday, according to charge nurse manager Justine Moore. Although this figure is not limited to those connected with Hyde Street, Moore notes the department did have “a very busy weekend.” St John’s Ambulance were at the scene and, along with Student Health, treated 83 injuries. According to a spokesperson from St John’s the majority of injuries were minor lacerations from trips and falls, but there were “a couple of nasty cuts requiring surgical review at the ED.”

Police also had to step in on numerous occasions. As well as chasing people off roofs and checking suspected 17-year-olds for ID, according to Edgar the Police only made 10 arrests, and only one of those arrested was an Otago student, with the remaining nine arrests consisting of three non-student Dunedin partygoers and six people from outside of Dunedin.

Predictably, the most concerning aspect of a day dedicated to binge drinking, was binge drinking. The Vice-Chancellor told Critic that she and the police were concerned about the “... dangerous level of intoxication that occurred”. “From where I was standing on Saturday, those students who were the most intoxicated ... did not have much fun. I watched severely intoxicated students hurt, insult, and annoy their friends, and many of them humiliated themselves.”

Critic received reports that the local liquor stores may not have helped the situation, with the suggestion that intoxicated people were served at nearby liquor stores contary to their liqour licences. The manager of Leith Street Liqourland responded, saying security were on the door preventing anyone appearing drunk from entering. “The only ones who could have gotten through, were if they put on a really convincing [sober] face.”

More diverse issues than mere scarfie intoxication emerged throughout the day as many partygoers decided it was the optimum time to test their roof-climbing skills. This came to a climax when one flat’s roof caved in under the weight of approximately ten people. No injuries were reported. However, two people had already been taken to hospital earlier in the day with serious injuries after falling from roofs.

With talk of liquor bans and disgruntled police and University staff, Hyde Street residents expressed fear that the event might be cancelled in future. “Obviously the roof thing was a bit of an issue, but it’d be a shame for it not to go ahead in the future, because it sets us apart from all the other unis” one Hyde St tenant told Critic.

The Vice-Chancellor was less certain. “It’s far to early to think about the future of the Hyde Street Party … Before we start to talk about another Hyde Street, we need to figure out how we can maintain the vibrant student culture while also minimising the risks to students.”

Logan Edgar is unashamedly “really keen to see it go ahead. It’s the best student party of the year.” However, Edgar wants some practical changes to ensure the event runs more smoothly and safely in future “We’ve got to make it a students-only event, perhaps where people have to register in advance if they’re going. That will stop it getting too big and I don’t think it’s actually the students who are causing a lot of the problems. Just look at only one of the ten arrested actually being an Otago student.”

If the event were limited to university students, Logan claims it would come under the Student Code of Conduct. “They just need to add in a rule, saying no students on roofs and we’re covered.”

Hayne seems, tentatively, to agree. “As the Vice-Chancellor, I can make more rules and hand out more punishments in an attempt to stem the tide, but I would prefer to work with students to find a more workable solution.”

“All we need,” says Logan, “is for someone to step up and have the balls to take responsibility. OUSA’s in a position to do that.”
This article first appeared in Issue 6, 2012.
Posted 7:07pm Sunday 1st April 2012 by Charlotte Greenfield and Josie Adams.