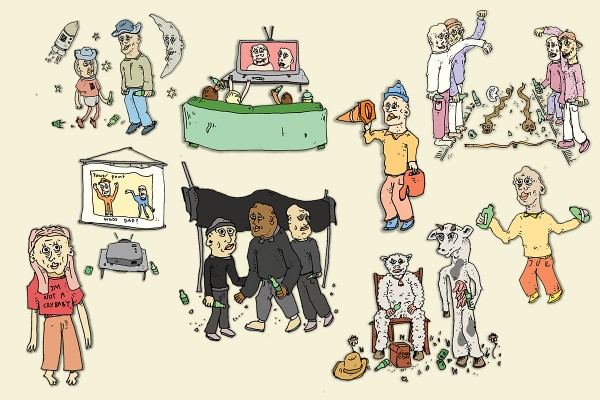 Throwing parties is hard. It requires lots of planning, and induces plenty of anxiety. You find yourself thinking: Will people come? Will they have fun? Will people think my idea is cool and original? Or will it be boring and will I be socially outcast forever?

Never fear, Critic is here! This list of party themes that you may or may not have heard of, all of which we have seen executed successfully at least once.

A favourite of your rural flatmate, getting on the piss when lambs are in spring is a September country tradition. When that first lamb emerges from the sheep-vag, pop open a cold bev and let the reckless drinking in an empty field with all your fellow farmer friends begin. Since most flats don’t resemble the countryside, we recommend just hosting a “country” themed party, either at your house or one of the many fields North Dunedin has to offer. For those of you with a rural background, run games and competitions that will make no sense to your city mouse flatmates. Ask them what an irrigator is. Send them to the “shearing shed.” As you can see, this one has real potential to get sexy. Cuntry Calendar, baby.

Recommended Drink: Speights if you’re basic, Lion Red if you’re classy.
Achievability: 7/10. Can lack the authenticity of the real thing, and is best hosted by someone who actually knows something about farming.

We’ve all heard about the cruelty of the Races. The treatment of the horses and their living conditions is only a step up from most Dundas flats, after all. There’s a solution for those who want to enjoy the thrill of the sport without the ethical implications: worm racing. All that’s needed is several worms, which can be sourced from the flat backyard. Gently place them on a paper plate, and off you go. Place each worm into a racing pool, and the first worm to wiggle outside the plate is the winner. The winner gets to boast the glory of being the ultimate Worm Warrior. Also, get creative with names. Think Oprah Wormfrey, Jeff Wormzos, or Denzel Wormington. Just please don’t eat the worms.

Recommended Drink: Tequila (has a worm in it if you buy the fancy ones).
Achieveability: 9/10. You just need dirt, plates and worms. However, not for those with a squirmy, weak stomach as worm touching is required.

Perfect for smaller, intimate groups, a PowerPoint party is a bit like an alcoholic TED Talk. Everyone brings a 5-minute presentation on a rogue topic, because we all know how important it is to understand which Disney dads your best friend thinks are most fuckable. Just make a PowerPoint on practically any topic and hold your friends hostage with the most disturbing content you can think of. The goal here is to start building the presentation already quite inebriated and then struggle to remember what the hell you were thinking when you wrote it. You’ll need some shots after hearing some of these – the only thing worse than rating Disney dads is rating people’s actual dads. Gag.

Recommended Drink: BYO cocktails are the go.
Achievability: 7/10 as long as it’s kept small. Points deducted as there is always the risk you will get too drunk to finish.

This one is not a universal party theme, I will admit. This is a selfish theme born only out of deep love for Twilight and the joy and nostalgia it brings. Twilight drinks are where it’s at, are perfect for smaller groups, and can be adapted for any audience. If you hate Twilight? Well, first you’re objectively wrong and seem to be living with a serious lack of taste. Go get checked for Covid. You can definitely make a drinking game out of the movies that will get you TANKED. Take a drink whenever Edward displays clownish behaviour. Whenever the dialogue makes you cringe. Whenever you see the Mormon really jump out in those outfit choices for literally every character. We all know you’re just watching it for the baseball scene anyway.

Recommended Drink: The strongest red wine New World can offer, a minimum of 16%.
Achievability: 10/10, though does require someone who knows how to work Soap2day given Netflix has taken Twilight off their platform.

One piece of advice – be careful with the guest list on this one. It can get brutal. But if you have a red shirt, write down your “red flag” on it, or tape it on. Now, this can get incredibly (emotionally) messy, so it’s important to vibe check the crowd beforehand. Make sure you invite people who can take a joke, and steer clear from inviting recent exes, mean girls, or people who are friends with benefits. Or if you don’t care and want to see the drama unfold, invite whoever the fuck you wnat.

Recommended Drinks: Tequila never fails.
Achievability: 10/10, all you need is a shirt and a marker, also highly recommended is a sense of humour and the ability to shake off painful truths.

Anything but a Cup

This one goes out to the real alcoholics. ‘Anything but a cup’ is a theme that most are familiar with - bring your pick of poison in any vessel that isn’t a bottle, can or cup. Prizes given to the best vessel. If you’re looking to blackout and lose not only the night but the past 48 hours, I have some recommendations. A mix of a minimum of 3 spirits, and your vessel should be deep, wide, but also importantly relatively spill proof. Think toddler sippy cup, but on a much larger scale, maybe like a vase or a gumboot. The rainhead of a humble watering-can also creates a truly experimental drinking experience.

Recommended Drink: It all tastes the same out of a shoe.
Achievability: 9/10, does require a bit of creativity and effort, but keep faith that if there’s one area Dunedin students will always get creative in, it’s ways to get fucked up faster and more efficiently than the party before.

No party theme list would be complete without the Dunedin classic, Scrumpy Hands. Two bottles of Scrumpy are taped to your hands for the night, and the only way to make that next step in evolution and regain opposable thumbs is to drink each bottle. Chill those bottles in the fridge beforehand, and drink that first bottle asap, just to regain control of at least one hand. Over the course of the night you can nurse the second like it’s your firstborn child. Not being able to use your hands has the side effect of not being able to use your phone, so this party actually makes for a far more social experience than you may think. Some people consider the challenge of the night to be actually having to drink Scrumpy, but I’ll drop a hot take here: Scrumpy is good. Red Scrumpy doesn’t taste bad and it’s cheap, so you can afford to hit Night ‘n Day afterward. Bonus points if you also climb Signal Hill.

Recommended Drink: This one's obvious babes.
Achievability: 8/10. It’s hard to operate with no hands, but at least you don’t have to think about what you’re buying.