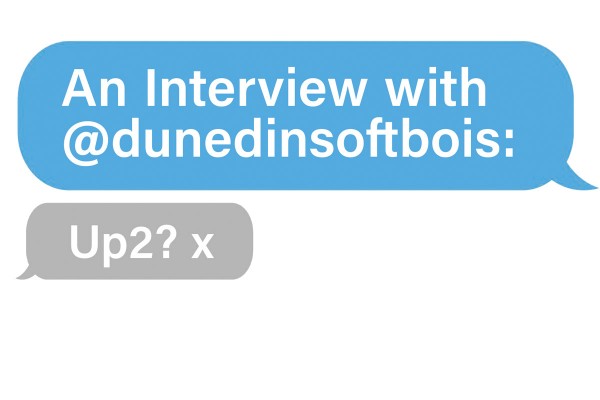 Meet the admin of @dunedinsoftbois, an Instagram account showcasing Ōtepoti’s finest bachelors. Their mission is to expose the ghastly Tinder messages from the vintage-sweater-wearing, Marlboro-smoking, e-girl yearning fuckboys who understand David Lynch more than you ever will.

They started the account one fateful day three years ago. After leaving a relationship and getting Tinder, Dunedinsoftboi’s admin found that (to no one’s surprise) the dating landscape of Dunedin remained atrocious. Something had to be done about it. “I’d recently started following beam_me_up_softboi, which is the original account based in the UK,” Dunedinsoftbois said. “I’d been reading a few articles on what a softboy was back when Vice was good. There’s a vacuum here, and I was surprised no one in NZ had done it before.”

That day, around the kitchen table, their flat got together and the account was conceived. “Some of the submissions are from softgirls, or softpeople. Whatever your gender identity, you can still be a softboi. It's a pretty universal constant,” they say. But, what is a softboi? “We all curate our personality, but they are curating a personality not because it's them, but because it's the easiest way to get a woman to sleep with them. There’s something a bit more concerning about saying ‘I like The Smiths’ because you want to get a specific kind of woman on your mattress on the floor with no bed support.”

Despite some people finding the account controversial or invasive, it’s much more a bit of fun and a way to explore the softboi phenomenon. “It's never been a mean spirited thing. There was never one boy who started it all and made me really angry. It's just more of a funny little observation,” they say.

Dunedinsoftbois has since opened up to submissions throughout Aotearoa, and there is a clear distinction of softbois species from city to city. “Wellington is a lot worse. I would say that Dunedin softbois on the whole tend to be — I don't want to say harmless, because I'm sure they have enacted some forms of harm — but they're funny. We can all relate. We’ve all been a Dunedin softboi at some point in our lives. We've all been listening to Marlin’s Dreaming and invited someone out to the smoking area of a gig. But there's something quite pernicious about a Wellington softboi where it seems a little more cultivated. They're specifically building this identity. We haven't had many from Auckland,” they say.

“There’s definitely a spectrum. There's some that are just funny, and the boys haven’t done anything wrong, versus ones where they are actually quite horrible and we’re directly calling them out.”

They receive around three to five submissions a week, including plenty that will never see the light of day. “There's ones where you have to tell the person, you need to actually seek help or report this. There's a really interesting phenomenon when you’re an anonymous account. There are people I know in person who have sent things that they would never have told me as a friend, which is why in part it has to stay anonymous, because I think it would make people uncomfortable. We try to be helpful to a point, but you can't really help someone when you dont know them.”

The response from softbois themselves is mixed. Some love it, and others have threatened lawsuits. “There are boys who submit themselves, which I always appreciate. Sometimes I wonder if they are actively creating those situations. I'm always a bit suspicious that they're mining for content. We also have boys who wanna talk about it, and we’re always happy to. What did they do wrong, how can they improve?”

“Then you get the occasional guy who's like, ‘I'm going to sue for defamation’. It’s kinda funny. The first time it happened we were like, oh my god, what do we do? We had to take a minute to sit back and think about it and go, actually, we’re fine. It isn’t defamation because nobody knows who it is, and he's the one who'd have to out himself as that boy if he was.”

What is the psychology behind a softboi? Dunedinsoftbois believes there’s a power aspect to it. “I think a lot of softbois are guys who were a bit nerdy in highschool, maybe didn't have many friends [...] then you get to uni, this space that values critical thinking, art and music, and so all those things you got bullied for in highschool are suddenly cool. There’s a sudden power trip that goes to their head where it's like, oh my gosh, women like me because of things I used to get bullied for, so these things are going to become my entire personality. Then they start treating women as badly as they were treated. That's just a small experience of my own.”

“The best thing that can happen to them is getting called out, and being open and responsive to that. I think what makes a bad softboi is one that gets aggressive or defensive. Softbois aren't inherently bad people, but it does show when they get called out. That's why I like Dunedinsoftbois. It tests that boundary. Are you going to find it funny, think introspectively about it? Or go into my DMs and tell me to shut the fuck up?”

They remain humble, despite living a double life of fame and fortune. They enjoy the positives of mild social media infamy without any of the responsibility of having a face attached. “The other day I was standing beside a crossing, and a group of girls were debating whether or not they should send something in. There have been people at parties talking about it, which is always funny.”

“Sometimes there’s a person you really wanna be friends with, and you wanna slip it into conversation. I have to tell myself: as soon as I use this page to try and impress people, I have become a softboi. The very thing I have sworn to destroy.”

If you are a recovering softboi, don’t despair — there is hope for you. In the wise words of the admin themself, “softbois are on their own journey. Honestly it sounds like I'm siding with the softboi, but just keep going; you'll learn eventually. Listen to the people you are sending these messages to. Have a conversation. Respect boundaries at all times. No means no. There’s a lot of friends of mine who were definitely softbois back in the day, and it's really just a journey they need to go through mentally and emotionally. Realise that liking Mac Demarco doesn't have to be your whole personality. You can do other things. You can express emotions. Just maybe stop ghosting people, at the end of the day.”

“Take the mickey out of yourself. We all say stupid shit when we’re trying to impress people. We’re all trying to be cooler and deeper than we actually are. No one really likes The Smiths that much. “