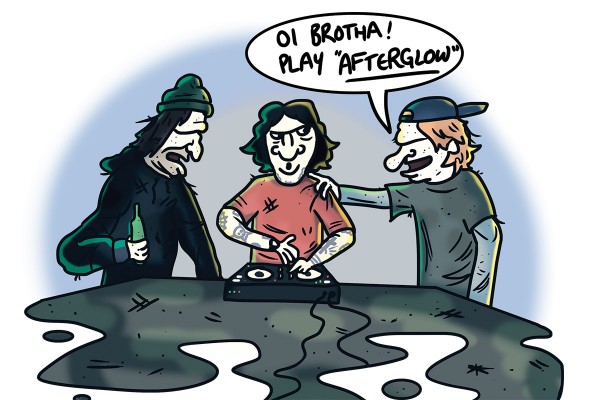 Opinion: Stop Playing so Much DnB at Parties

It’s a Saturday night. The breathas and beezys are out in North Dunedin. The only thing accompanying them is a box of piss, their trusty vape, and promises to themselves that they are going to break. The notorious party streets are full of people and the rumbling, shaking sound of drum and bass. There is no denying the impact that drum and bass music has had on the Dunedin scene. It’s a pivotal part of our culture. But, much like student bars and loan free study, it must come to an end. So I’m here to say it, we need to stop playing so much DnB at parties.

Now, I’m not saying we have to completely banish drum and bass. I’m just saying, it’s about time we get some variation at parties and doofs. I have no issue with a drum and bass remix of a song, or one every now and again, but the constant hours upon hours of doofdoofgrrrrrreeeeee sounding music at parties is becoming exhausting. It’s tiresome, it’s boring, it’s too much of the same old same old. Most importantly, it makes parties less memorable. Now, I know what you’re thinking. How the fuck could I suggest such a thing? What do I have against partying? Am I trying to ruin everyone’s good time? The answer is no, I’m here to improve your partying experience, and make it more memorable, with a greater sense of social cohesion. Now, I’m no psychologist, but here, I present to you the reason why we should stop playing DnB at parties:

Isn’t the point of partying to get fucked up, do stupid shit, and make memories? To reminisce on when you’re middle aged with a corporate job and hating your life? So you can sit back and say “man, remember the time I burned that couch?” Or “remember that time I threw up on my mate in the pint night line?”  Music is the soundtrack to life, and it plays a huge part in forming our memory. That’s the problem with an excessive amount of drum and bass, all the evenings blend into one, making for less memorable, sentimental partying. To quote Pitbull: I just wanna feel this moment. Never, have I ever attended a party where drum and bass is playing the entire time and I have looked back fondly and gone “ah yes, I remember that night.” It’s all the same. It’s the loud doof doof, the geared up breathas, some girl crying in the corner (probably over said geared up breatha) while you try to find your friends in a haze of vape smoke and weed.

This realisation hit me last weekend. Like any normal student, I went to a red card. There were so many people there, the hosts just said “fuck it, just have fun.” The music started cranking up. There was Pitbull. There was Lady Gaga. There was Britney Spears. The Black Eyed Peas. Everyone was dancing, singing, drinking, chatting. It was a perfect evening. I knew about three people there, but still had the time of my life.

In that moment, I realised that every single party I have attended which has played 2000s bangers, or a classic ’80s rock hit, or ABBA, I have remembered with great fondness, happiness and respect. The songs help me to piece together the evening on a dusty Sunday morning. They curate the stories I will tell my grandchildren when I ship them off to this university. I couldn’t tell you anything I remembered from the Flo and O Week parties, or just random DnB piss ups at flats. But you know what I do remember?

I remember blacking out in the hallway of Knox College to Tonight Tonight by Hot Chelle Rae in my second year. I remember my friend getting in a fist fight in the Suburbia line to Dynamite by Taio Cruz, I remember stumbling into a party on Leith Street, watching people drape their arms over one another while singing Dancing in the Moonlight under a warm, spring sky. I remember the walls of a flat party shaking while people screamed the lyrics to Shake It by Metro Station. I remember doing shots of vodka as a sneaky fresher in my hall to Gold Digger by Kanye West. My point is that when proper, well known, popular songs are played at parties, it makes for a more memorable, more cohesive experience. Everyone is singing the lyrics together, dancing, hugging, and holding hands. There is nothing but smiles, joy, and laughter. Memories and friends are made, and a true, genuine moment is shared.

My point is that playing nostalgic tunes, or classic 2000s bangers we all used to party to in school, or the rock hits that never die are the best party songs, and it’s time that we, as Otago student integrate them into our lives. They’re also just objectively better than DnB.

Rihanna didn’t put her entire pussy into Umbrella for you to listen to some Soundcloud doofdoof. Flo Rida and T Pain didn’t curate the masterpiece that is Low for you to listen to Tour by Macky Gee for the third time in a row. Outkast did not have Hey Ya! place in Rolling Stone magazine's top 500 songs of all time for Dylan The Breatha who lives on Castle Street to do some shitty, geared up remix on his mates’ decks. Show some respect to the musical greatness that came before drum and bass. Pay homage to the songs everybody knows. I’ve never seen anyone turn their nose up at Sweet Caroline by Neil Diamond, or Africa by Toto.

Say what you want, call my opinion shit. Maybe I’m too sentimental — I am a Pisces after all. I stand by it. The point is, just play some real fucking music at your next party. Switch it up, your guests might thank you for it. And no, I’m not sorry for party rocking.