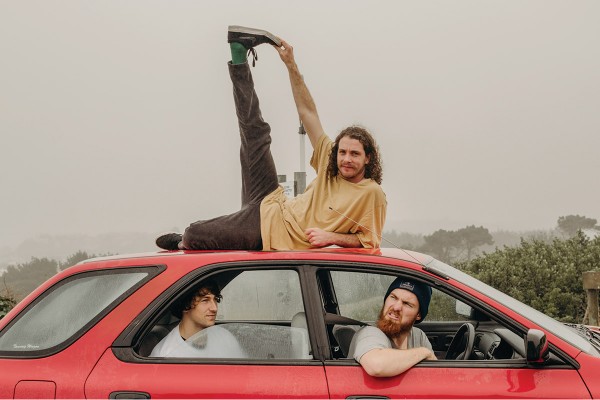 Ōtepoti band L Hotel are known for many things. Pint Night gigs, being objectively cool blokes, playing covers, and releasing all round good tunes. The trio, which consists of former reality TV star and bassist Dave Borrie (Taurus sun), drummer Fred Richardson (Leo sun), and guitarist Jono Everts (Taurus sun) has returned for 2021 with new music coming out, having just released their single Old Friend Called Potential this past Friday. Critic Te Arohi sat down with Dave Borrie to talk about the band’s upcoming music, gigging in the Covid age, and the story of how L Hotel came to be.

“We have been recording an EP all year, but as with most things musician, we are running behind,” says Dave, who is sitting eagerly in a wobbly office chair which could swing out from under him at any moment. “It was supposed to be out in September, it’s a follow up to the two singles we released at the end of last year.” The trio recorded with local producer Peter Molteno, at 236 Studios in North East Valley. “We have always recorded with him, we have so much fun with it,” says Dave about the process. “We are making sure it’s what we want to release.” As for the sound, Dave says it’s “more electric” but also that “mum likes it.”

The members of L Hotel have always been eager musicians, with the upcoming EP being a way to truly make their mark and solidify how far they have come on their respective journeys. “I always entered Rock Quest as a kid, and the thought of us having an EP is like wow, that was my dream when I was in high school, and now it’s coming to reality,” says Dave. “It feels like we’ve earned it.”

Prior to forming L Hotel, the trio were a cover band called The Shitz. “L Hotel started as a project for originals,” he says. The name “L Hotel” is after the Lumbridge Hotel, which is located in the hills of Central Otago, where the group met. Nowadays, the band only plays covers while they flesh out originals.

One of the places L Hotel can most commonly be found playing is Pint Night. “There is something cool about Pint Night,” says Dave. The band originally used to attend pint nights as gig goers, and describe that now being able to play pint night feels like a “full circle and cathartic” moment. “We miss playing gigs there, it’s always gross and sweaty and the roof is low but it’s so fun. It’s awesome, every time we play pint night we wear grey t-shirts so you can see big pit stains, and I want one more opportunity to do that,” says Dave.

Despite the band’s eagerness to get going on releasing music and playing gigs, the snap lockdown threw a few spanners in the works. The group is still trying to work out the logistics of their upcoming tours. “We made a really big push to be organised for recording this EP. We got all of our recording of the bases done before lockdown. We finished recording in August, we got it out of the way before lockdown which is great,” he says.” “It’s great not to have to do it again, but there’s other layers that need to be added. We were fortunate to get it done, and it has allowed us to sit back and listen to the tracks and be like ‘what do we want to do with this one?’”

“We’ve been sitting on our laurels. In a Covid world it’s hard to plan a tour or a gig, we’ve had things binned or canned because of it,” says Dave. “Any musician at the moment, you organise a tour or show but there is a suspicion in your mind that it might not go ahead, you’re in that mindset.”

Aside from being in L Hotel, Dave is also known for his short stint on reality TV, competing in the most recent season of The Bachelorette. This begs the questions. Did Dave’s 15 minutes of fame help catapult things further?

“I feel like I didn’t capitalise on it enough. I don’t wanna be the guy who’s like ‘yo, I’m Dave, I’m the guy with the egg, check this band out,’” he says. “It’s ingenuine, but at the same time I wish I funneled more of that 15 minutes of fame into it. I don’t think I tried as hard as I could have.”

When they aren’t gigging or writing songs, the band keeps up with a variety of other quirky hobbies. “Fred brews beers and writes fan fiction, Jono is an untypical physics student who loves surfing and music,” says Dave. “Jono is also really good at Age of Empires.” As for Dave, he says he just “likes to laugh” and is also a “budding Youtuber.” As for their biggest fans, Dave said they once had a Dad from Chicago message them. They also have a large listenership in Dublin.

But like all good things, they must come to an end. While the band has big goals and dreams for now, Dave said it’s unlikely they will play a pint night gig or be releasing songs when they’re middle aged and jaded. “We put a lot of work into this, it’s not going to be something that lasts forever. We would like to see how far this goes. We want to tour, say we did fun shit, and played the music,” he says. “It’s not a hobby, but we are aware it’s a moment and we are making the most of it. If you ever see an L Hotel poster, you better come,” he says. After finishing his sentimental statement, Dave got up and headed out of the office, bidding us farewell. He shut the door behind him, probably to go make his next Youtube video.

L Hotel’s newest single “Old Friend Called Potential” is available for streaming on Spotify. Keep your eyes peeled, as the EP release will hopefully be this October.