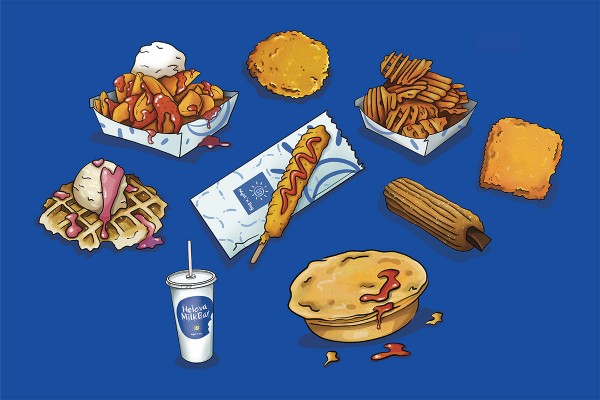 As poor students, there is nothing we love more than cheap food. Luckily, Night ‘n Day provides such a service with their monthly Tuesday deals. A few years ago, they used to only be $2, but thanks to capitalism, prices have since been on the increase and now sit more around the $3 to $4 range. However, they’re still cheap, tasty and work a treat to cure the early mid-week blues.

This should be far from a surprise. The criss cross chips take the cake because they are hot, salty, and crunchy on the outside — while soft and fluffy on the inside, like a crying Arnold Schwarzenegger. At the moment they retail for $3, which I think is a pretty good bargain. Generally speaking, the portions are decent in size and will keep you sated for at least several seconds. The upgrade to the works with sauces for $4 is also not too bad. Overall, they check out in terms of taste, value, and satisfaction.

9.5/10. Crunchy, yet a circus of complexity. Also, severe booze poos the next morning

Maybe I was the wrong person to objectively review this, considering I have a strong bias towards potato-based snacks. Coming in at number two is wedges. Much like the criss cross chips, wedges are also hot, salty, and crispy. Likewise, they are satisfying, and provide a premium source of slow burning carbohydrate to keep you full for long periods of time. However, the reason they are coming in at number two is because they aren’t as funky in appearance as the criss cross chips. A wedge is a wedge, a hunk of potato. Criss cross chips have more flare and texture to them.

8/10. A delightful door-stop from the world of desiccated taters

Coming in third, we have milkshakes. Milkshakes are creamy, delicious, and sweet. They go down a fucking treat on a nice, hot day. In terms of their dessert counterparts, they aren’t boring and conventional like simple ice cream cones. Unlike waffles, they aren’t messy to eat. Milkshakes offer you choice, as there is a variety of flavours. A milkshake is consistent, it’s reliable, and is always there for you, unlike the University.

7.5/10. Cows frolic under the noonday sun, blissfully unaware of what is to come

In fourth place, we have the pies. Much like their fellow carbohydrate buddies listed above, the pies are hot, steamy, and crispy. There’s a range of fillings, although sometimes, Night ‘n Day pie meat can be questionable depending how long it’s sat out in the heat. The pastry is usually crispy and falls apart in your mouth, and the meaty gravy is thick and juicy. However, it just doesn’t slap as hard as the criss cross chips or wedges, and has points deducted as there is far more potential for food poisoning.

The strongest contender for fifth place is the waffles. While they’re sweet and delicious, they’re also messy to eat. Waffles are also the type of food which can only be enjoyed at particular times of the day. Unlike a box of french fries, or a one handed pie carry while you walk to a lecture, there’s a lot more effort required. They can also sometimes be a bit dry and soggy, and no one wants that. However, if you’re ready to sit and commit to eating this somewhat sticky mess, be my guest.

5/10. Leakier than the National Party caucus

Churros are kind of a sweet-sugary nothingness. For $2 you can get a single, lone churro, or for $4 you can add in a dark chocolate bar. Considering you can get a pie or packet of chips from Campus Shop for about the same price, the ol’ churros are a bit of a rip off. They aren’t particularly satisfying, and maybe it’s just my 12 year old boy brain kicking into gear, but the concept of sticking a poor innocent chocolate bar inside that cinnamon riddled stale hole makes me think of some nasty, nasty things. It’s better off to spend a little more, and get good quality ones at Churros Ole.

4/10. Being drafted into a foreign war for oil but finding your true calling, as you bond ever deeper with The Boys™

I don’t care what anyone says, hot dogs on a stick are gross, no matter where you get them from. The batter is always moist and greasy, the meat is most definitely not real meat, and the whole concept is just flawed. I don’t want to have to deep throat even MORE fake meat than I already have to. This isn’t even anything about Night ‘n Day, but if you’re buying these fake, floppy, stick dicks, please reassess your life choices.

2.5/10. Brewing a magic potion that fails because of the low quality of Tinder root available in your area

Lasagna should not be deep fried, that’s the end of the story. I don’t understand this concept and I never will. It isn’t tasty in the slightest and it just tastes like a face full of ground mince and stale bread crumbs, which is what it quite literally is.

2/10. Catching a mouse in your flat moustrap, blending it up, and serving it as a health tonic to your bad flatmate who pisses on the floor but doesn’t clean common areas or put new rolls of loo paper on the holder

According to Radio One Music Director and local celeb Dave Borrie, energy shakes are one of the “worst things to happen to Aotearoa.” It’s like drinking straight fucking battery acid. Like, just have a can of Red Bull or Monster, there is no need to over complicate it by adding in ice cream and all sorts of funny business. That shit is already bad enough for you as it is. This tastes like something you’d make in year ten food science when you were allowed to ‘get creative’, or the potion you made in your childhood garden. It’s just straight up gross, and unnecessary.

Although it may sound similar to cool actor and iconic High School Musical actor Corbin Bleu, nothing about the Night ‘n Day cordon bleus are cool or nice in any way. Why is there ham and chicken and cheese in one thing? That’s such an overwhelming combination, eating it feels like you’re committing cannibalism time and time over. The crumb is oily but also dry at the same time. Like, can someone please explain this to me? All in all, it’s got a weird, skin-like texture to it, and the concept is incredibly flawed. A cordon bleu just can’t be trusted.

0.00000/10. Spending 30k on a business degree and considering yourself educated