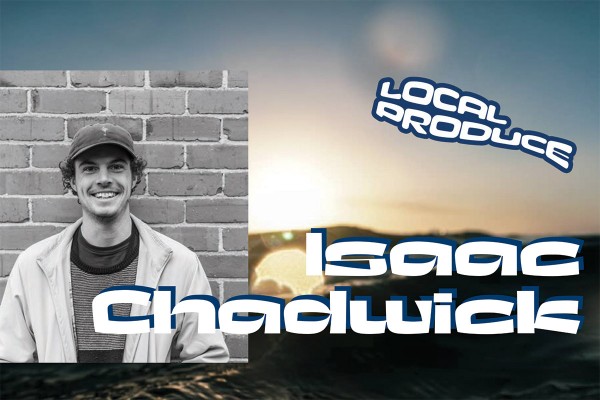 Isaac Chadwick is a new creative who has recently launched onto the Dunedin scene. He is an aspiring filmmaker, session musician and surfer who is successfully moulding all of his interests into artistic projects. Critic sat down to chat with him on his new projects and what it’s like being a creative in Dunedin.

Growing up in Northland, Isaac was always a keen surfer and filmmaker. “I’m really into filmmaking, as a kid I’d make stop motion films with Lego,” he says. He spent his teenage years in Tauranga, surrounded by the ocean which sparked his interest in surfing. Isaac then moved to Otago, and began a degree in Media and Film. Last year, he released his first film “Bask: Volume 1,” a documentary which followed him and his friends on their surfing journey’s in Dunedin.

“I documented me and my mates living on Castle Street, it was a surf film and documentary which looked at the whole year, post Covid.” Isaac and his friends then hosted a screening of the film, which amassed an audience of over 200 people. His film also led to him being featured in the New Zealand Surfing Journal, and Los Angeles based publication, Reckless Magazine. He is currently working on a follow up to the film with his friend and other Dunedin artist, Sam Charlesworth.

“We’re working on the soundtrack together, it’s a bit hectic,” he says. As for his future endeavours, Isaac says he is wanting to branch into new types of filmmaking. “I’m wanting to head into a more fiction and narrative style,” he says.

Alongside filmmaking, Isaac is also a talented musician, who currently works as a session artist for plenty of well-known acts in the Dunedin music scene, including TJ Zee, who goes by the stage name Zexii. Isaac says that in the future, he hopes to branch out further into music, and enjoys combining it with his filmmaking. “Next year, I want to get on top of it and get a band going. I’m always looking for the next big thing I can sink my teeth into,” he says.

Isaac says that both the Dunedin community, and city is the perfect place to develop as a creative. “I love what I study, it gives me time to find out what I want. It’s so good. I can explore. I can explore the best places in the country. There’s no restraints, it’s a big open canvas,” he says. “There’s so much to be influenced by because you have the history of the music culture here. With the surfing, you have all this beautiful scenery. It’s an emotive place to get inspired,” he says.

For his future goals, Isaac hopes to finish his follow up documentary project and get into the music scene. “I’d love to be an independent filmmaker, to have money to make films. I want to go into stuff like that. I’m so fortunate to be given the resources and go for it. It’s super sick, it’s awesome. The films are an expression — we’re being true to ourselves.”

Isaac is set to (hopefully) premiere his new film in mid-October, so stay tuned for updates.