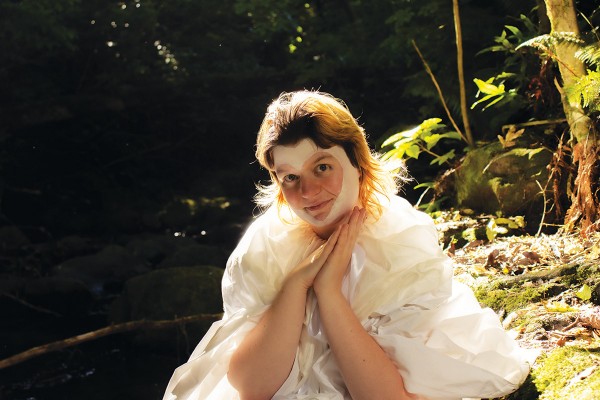 Adelaide Cara is an Ōtepoti musician who recently recorded their debut album ‘How Does This Sound?’ The album is nostalgic and dreamy, perfect to listen to while you drive around at night, with haunting vocals. Thankfully they released it on cassette tape, so even my very old car can play it.

Adelaide studied music at Otago for three years. This album is the culmination of that experience, and of their emotional journey so far. “I wrote from what I knew: late adolescence, the emotional highs and lows that come from grappling with early adulthood. Identity crises, mental health, euphoria, heartbreak.”

They’ve been wanting to make an album for ages. “It’s been my dream ever since I can remember to make and release an album. I didn’t really care how good it was, I just wanted to do it,” Adelaide said. The entire process of making the album from start to finish took three years. “From writing the album, to recording, mixing, mastering, and then putting together things like music videos and promotion. There was a global pandemic somewhere in there as well, which always sets things back a bit,” they said.

‘How Does This Sound?’ was recorded at the University’s recording studios with the help of their mates. Adelaide said: “I was so lucky that through my degree I was able to use all their facilities, and on top of that have the loveliest friends helping me out of the goodness of their hearts.” Adelaide thinks using acoustic instruments added character to the album. “There’s always going to be fun little details, like piano pedal thuds and violin bow brush strokes, but it adds an authentic texture in my opinion. Considering there’s a lot of synth sounds, it balances out.”

Adelaide has a classical background. “I was classically trained in singing from the age of four to eighteen, and went on to get an Honours in Music Production and Composition here at Otago.” They also grew up in Dunedin. “Dunedin is a unique place which attracts unique people. I’ve lived here most of my life, so I feel like I know a lot of people. There’s always new faces coming through to keep things interesting.”

Adelaide “played a beautiful one-off show for my album release, which was magical.” But live gigs are a challenge because a lot of musicians collaborated on the songs. “I’m still working out my live setup. Everything is very big sounding, and since I don’t really play any of the instruments (I have very talented friends), it’s a bit of a thing to work out.” But they’re optimistic that they’ll make it at some point. “I’ll get there. I’m making sure to be slow and gentle on myself with my music career.”

They also have a separate “sad girl covers band” with a friend, singing “sad and spooky covers of upbeat songs” which have the potential to grace an open mic night.

As for any upcoming releases, Adelaide cryptically stated that: “The future is a mystery to us all…”

Adelaide’s music can be streamed on Spotify and other streaming platforms. Follow them on Instagram for other updates at @_adelaidecara.