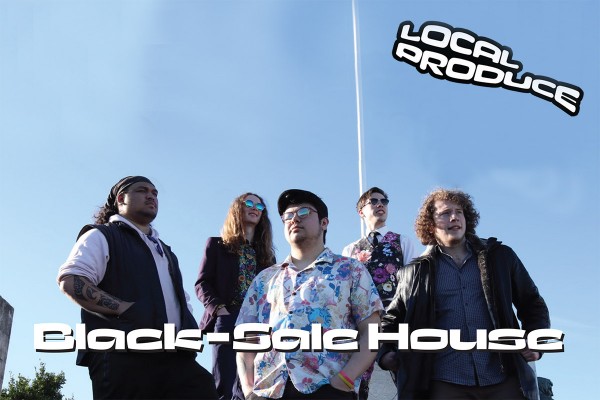 The group of five, made up of Masin on vocals, Samuel on keyboards, Finn on guitar, Joshua on drums, and Sol on bass, sat down with Critic to talk about their musical journeys, eclectic sound, and their goals for the future.

Each of the boys has had an interest in music from an early age. “It’s a family thing for me,” says Masin. “I’m a third generation musician. Before I joined [Black Sale House,] I was doing solo music for a year before I came to Uni.” Sam has been playing the piano since he was a child, and spent most of his young adult life filling in for various bands and doing session work. “Last year was the first time I’ve joined a band, and we all want the same thing, it’s so fun,” he says. Joshua started playing drums at age ten. At University he met the other members, saying “these guys came along, and I found this perfect group of people, it’s been such a great experience.” Sol has been playing bass for around four years now, previously gigging with cover bands, and guitarist Finn says although no one in his family was musical, it’s always “been around him.”

“We’ve got three members from Dunedin, one from Christchurch, and one from Australia. There's a musical difference there, which has influenced us to not stick to one genre. Especially playing live, our set list is hard to figure out, because our energy and vibe change per song,” says Masin. Sam agrees, saying “we’ve got songs that touch all sorts of extremes, someone might be heavy rock, but once we get our hands on it, it comes out as something that can be recognised as our sound.” Finn says the group also aims to write and create in a way that doesn’t “pigeonhole” them to one genre. “We’ve tried to add new ways of looking at things,” he says.

The group are determined to see how far they can take things, and want to make a mark on the new generation of Dunedin Sound musicians. Sam says that when the boys are playing and working out songs, the goal is to create something new. “There are bands that slot nicely into the Dunedin sound, but we want to appeal to the new wave of students. We all study music at university, so there is a market for it. We want to write songs which are important to people,” says Sam, adding that “the new scene is a lot more diverse than the old one.”

Sol says it’s interesting to see how the Dunedin music scene has developed in recent years. “We are different to the classic Dunedin sound, it was more punk but we are more reggae and funk. It’ll be interesting to see how it evolves over the next generation. You’ve got grunge bands, psychedelic rock, solo artists who are playing acoustic sets, and even Pequeño jazz nights. It’s all being embraced,” he says.

“I love music, there’s nothing like being on stage, we all share that feeling. I’d love to make a living out of it, as long as I’m having fun,” says Sam. The others agree, with Sol saying “it would be amazing to play some big venues and festivals, at the end of the day it’s about having fun and an outlet where we can play music.” Finn says, “the enjoyment is why I do it. It started off in our bedrooms jamming, a year later we are playing in the stadium. It’ll be awesome to see where that can go, parents always talk about uni bands, so it’ll be great if we can create something for people to look back on.”

Black Sale House are always playing local gigs around Dunedin, and their music is on Spotify. Follow their social media to stay up to date on upcoming gigs.