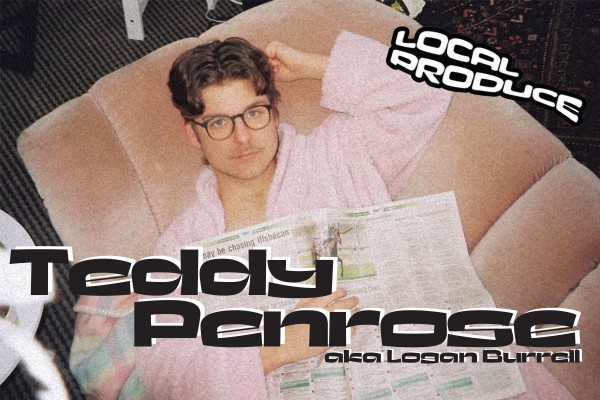 Otago student Logan Burrell is well accustomed with the Dunedin music scene. After playing in several local bands, he has since branched out on his own solo project, releasing music under the pseudonym Teddy Penrose. Critic sat down with Logan to chat about his creative projects, upcoming plans, and what it’s like being part of the Dunedin Sound.

Currently studying Music and International Business, Logan had his start in the Dunedin scene with the band Jam Henderson. “That was formed through my friend Sam Elliot and myself meeting at a party that had a terrible band playing, and we decided hey, if we’re going to talk about how bad a band is we should probably have a band ourselves,” he said. After being part of Jam Henderson for a while, Logan continued to meet other Dunedin musicians, such as Peter Molteno who runs 235 Studios, where he later recorded his single at. When he’s not performing, Logan also co-hosts the BLT Show on Radio One. However, this year he decided to branch out on his own. “I’ve been playing with a bunch of people at University, but I am going outside of that. Teddy Penrose is my solo project, and I’ve got one single out with more coming in the summer,” he says.

Logan has been playing music for as long as he can remember, beginning to take it seriously in his later high school years. “[Music] was something I always did, I thought it was something everyone did, going home and playing instruments. But then when I got to high school I had a few good mentors and I started to write music and play in bands and I fell in love with it, especially playing in a band. It’s so much fun playing gigs,” he says.

As for his musical influences, Logan is a bass player, which is heavily incorporated into his sound. “Everything for me stems from bass, I’m incredibly into motown music. There’s a bass player called James Jameson who reinvented bass lines so they could be played melodically. I tend to hold a lot of that when I write songs. It’s about the bassline. For most of it, trying to create something you can groove to and that people can’t help but bop their head along to,” he says.

While being in the Dunedin scene helped kickstart Logan’s music, he says there are some challenges when it comes to breaking out solo. “It’s very much a family based community, everyone is on the same level of struggle, so we end up pulling each other up a lot of the time in contrast to a bigger city, where there’s so much competition for gigging. But down here, everyone is helping each other out,” he says. “However, the cost is that it's hard to break yourself out of that classic Dunedin sound, as we all sound similar, there can sometimes be limited variation, but that's not bad either.”

Logan says his favorite part about making music is gigging and watching how crowds respond to his sound. “It’s the moments when you look around in the crowd, usually between a verse and  a chorus and you see one person sticking out to you who’s really vibing just by the look on their face, it’s seeing emotion in other people because of what you’re doing,” he says.

As for the future, Logan says he wants to continue releasing solo music, and hopes to base his career around music. “I don’t know what that means yet, whether it’s performing, but I’d love to make money from music so I could spend more time doing it, I used to maybe see myself in an office job, but I don’t vibe with that anymore I suppose,” he says.

Teddy Penrose can be found on Spotify.