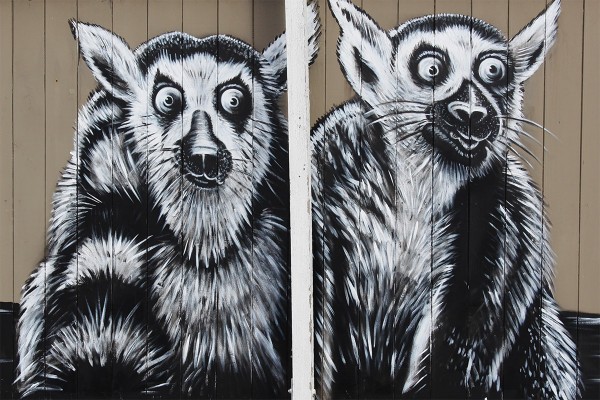 Living in Dunedin, chances are you've seen a variety of street art — a couple of hoiho beside Market Kitchen, or the rooster outside of CJ’s supermarket. Bruce Mahalski is the artist behind these creations, performing necromancy on the Animal Attic’s ailing taxidermy, bringing them back to life as murals. (In case you don’t know, the Animal Attic is the taxidermy collection in the Otago Museum).

I sat down with Bruce for an interview. We met at his private collection, the Museum of Natural Mystery, sipping tea on a couch while surrounded by thousands of bones. “If someone saw this museum from the outside, they might superficially glance and get the idea that it’s a museum of the macabre, and I'm some kind of death freak,” he said, showing me his latest piece: an artwork made of gannet skulls. “But actually it’s a museum promoting conservation.” Bruce has always tried to create art pertaining to conservation, and his murals, which he’s been painting since 2005, are an extension of that.

He describes the murals as a form of “social impact”. By getting Otago Museum’s collection out on the street, he hopes to encourage visitors to Otago Museum in turn. “I've always loved the Otago Museum. [The Museum of Natural Mystery] is like a child of the Otago Museum. When I was young, there wasn't a zoo in Dunedin, but there was the Animal Attic. I thought I'd try to channel that love.” As of today, Bruce has over 20 exterior murals under his own name, plus countless others that are interior, abroad, or under pseudonyms.

Animism, the belief that everything in nature has a distinct spiritual essence, is a core part of his work. “I try to imagine when I'm making art that I am living in a pre-European world, and I am a primitive animal. I see myself as an animal of the world that just happens to be alive at the moment. I’m an animal at the cusp of extinction, and I just wish everybody could see the world in the way that I see it.”

Bruce’s latest piece is a common mudpuppy skeleton, a darling aquatic salamander. He’s drawn to the curious and quirky, especially when there’s narrative involved. Bruce’s iconic hoiho got tagged over recently but he’s not too salty. He’s planning to replace them with the Animal Attic lions, who escaped the circus in 1978 and roamed the streets of Lawrence. They knocked over a kid named Craig who got an awesome scar on his face.

“I'm not going to paint the mural for someone unless it’s got some story to it,” is Bruce’s dogma. “It’s the same in [the Museum of Natural Mystery]. A lot of the objects are not interesting in and of themselves as an object, but what is interesting is the story it tells, the connection within an individual.”

When deciding on what animal to paint, Bruce says “a lot of murals are about negotiating with the wall owner. If you’ve got a wall, I’ll put something on it, for either nothing or koha. I’m drawn to insects, the small stuff. I like painting microscopic things on walls. Nobody’s really doing that so I've done a few murals with plankton around the place. I used to work with plankton when I worked at NIWA, I’ve got a soft spot for them. I’d like to draw a giant crab. A few more crab murals would be nice.”

“I've been criticised about not painting native animals. Do you know how many fucking tui I’ve painted? As long as I'm concerned, if it’s at the Animal Attic, it's a native animal to me. It’s local and it’s got that story to it.”

Usually Bruce gets permission for his murals. Smaller pieces only take an afternoon to complete. He explains that “a lot of it is about speed if you're doing illegal stuff. I actually came into it legally as an art teacher. To me, I want to get art up first and then get away. So I've learnt to do things very quickly.”

In saying that, “there’s a few paintings where I've just really loved a wall and done it covertly,” he admits. “The council says you need resource consent to do a mural over ten metres square. No other city has this, because murals are temporary, but Dunedin for some reason sees them as permanent. There’s a few people on the council who don't like what I'm doing, and I don’t get any support from them. But I get a huge amount of support from the museum.”

Regardless, “Dunedin has become well known for [street art], and on the whole I think it’s been a great thing. It’s all in the eye of the beholder, isn’t it? Street art, graffiti, Banksy, in the beginning it's like — we don't want that, it’s illegal. Then people started liking it, they started to adopt it, and it transitioned to something we pay thousands of dollars for. People came on board with the fact that this is something we see as giving back to our community, and I've seen that effect myself with certain murals I’ve been involved with. Where the community is really engaged with the mural and felt like a possession of it. A love for it. A willingness to protect it.”

It’s true. Many of his murals have become Pokestops. Even Bruce’s museum is a Pokestop. He had no idea about this until I told him I caught an Aipom before our chat.

To Bruce, good art is about starting conversations. “I dont give a fuck about the money, or becoming a famous artist. As long as I can make a living, I'll just keep trying to be a science and environmental communicator. We’re on the cusp of extinction at the moment and we need to pull our socks up.”

I asked Bruce what creature from the Animal Attic he’d bring back to life, on the condition it would be a tame and loyal companion. “A wombat,” he replied solemnly. “I love wombats. I went to Tasmania a few years ago and hung out with wombats. Echidnas would be a close second. Wombats [are] amazing. I just love wombats. Cubic poos.”

The interview finished, as Bruce had to buy a new heat lamp for the flesh eating beetles in his garage. He is a bizarre and wonderful creature. Do yourself a favour by checking out his work.