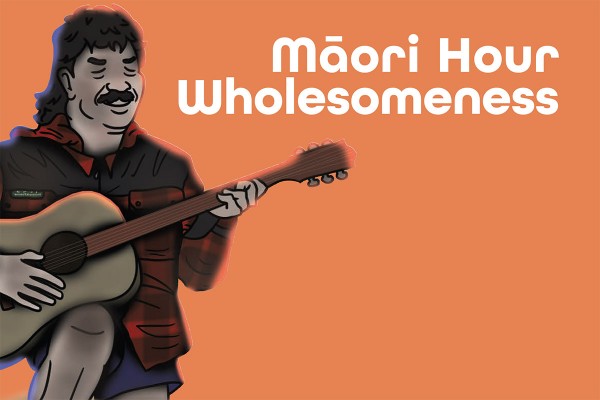 Māori hour is an incredibly wholesome phenomenon. I am not Māori and am not speaking on behalf of Māori and never will. I am just here to comment on a cultural phenomenon I’ve observed, one which is interesting, special, and unique to Aotearoa.

Imagine this. You’re at a flat party having the most splendid time. You and your mates, and your mates’ mates, are all big-chilling to the max. The air smells like sweet strawberry shortcake clouds, yeasty beer, God’s greatest green gift to earth, and musty sweat.

You’ve all made it to the end of the night. It’s late and well past bedtime, almost time to wake up actually. You get up to leave and as you sluggishly approach the door, you hear the distinct and unmistakable clobbering of a pair of Red Bands (much more notorious than, and not to be confused with, red bottoms) from down the hall.

You whip your head back around to the congregation of your friends in the lounge, just in time to witness a hunting-and-fishing-coat clad, gumboot wearing, mullet-growing Māori man enter the room. He’s got the grace of Aaradhna and the swagger of Dennis Marsh.

He turns off the UE boom, halfway through Mambo No. 5 (A Little Bit of…) by Lou Bega, and commands the attention of the room. He’s got a guitar strapped to his back. He swings it around to his front in one swift motion, sets his foot upon the arm of the couch, and rests the guitar upon his bent knee. You’re in a deep trance, aided by sleep deprivation.

You watch as he starts strumming the sweet strings, the notes echoing through the flat, bouncing off the walls of the lounge. Soon enough, everyone around you is singing waiata. Some are naturally talented, really good, they’re harmonizing and everything. Others not so much — but it doesn’t matter.

This is Māori hour. And I feel bad for anyone who hasn’t experienced it.

Māori hour signifies the end of a night on the rark, when everyone’s almost off to bed but not quite. It’s also a gentle way of respectfully letting everyone know that it’s simply home time.

If you’ve never had the privilege of experiencing Māori hour, you should immediately hop on Spotify and jam the playlist dubbed ‘Māori shed party’. It might be the closest thing you’ll get to Māori hour, and matches the vibes exactly, precisely.