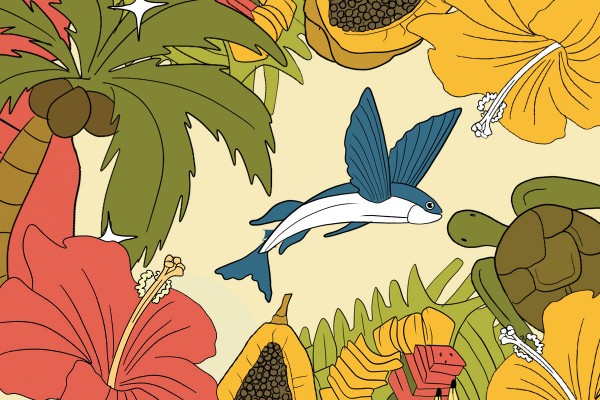 Kia orāna all! Last week, from Sunday 1 August to Monday 7 August, was Cook Islands language week. To celebrate, we bring you this piece about one of the few places you might be able to travel to within the next year or so (thanks Miss Rona).

To learn more about the Cook Islands, I talked to Bree and Mamia who serve as the Vice President and Cultural Representative, respectively, on the Otago Cook Islands Students Association (OCISA).

The Cook Islands are part of the Polynesian Islands. “Rarotonga means under Tonga, so the Cook Islands are under Tonga,” said Bree. “The Cook Islands have 15 islands that are all quite far apart, and most of the islands have their own dialect. Rarotonga is the main land. To travel to the northern group of islands is about a four hour flight from Rarotonga on a small plane. It takes about 40 minutes to get to Aitutaki, which is a little island they call the beauty of the South Pacific,” said Bree. “The oldest island is Mangaia. The most populated island is Rarotonga, and that’s where everything is, that’s where all the tourists go,” said Bree.

The Cook Islands are self-governed and this year they celebrate their 56th year of independence. “We’re still supported by New Zealand, but we have our own government,” said Bree. “On the 4th of August, our independence day, there’s an event called Te Maeva Nui back in the islands. Each island performs a traditional dance and song, it’s just a day to celebrate our culture,” said Bree.

Both Bree and Mamia have recently travelled to the Cook Islands. Bree spent lockdown and most of 2020 back there, doing Uni work online, while Mamia most recently visited during the mid-year break. They both commented on how different the islands are without the mad influx of tourists. “The islands are more beautiful now, they’re actually clean. To me, the air is much clearer and cleaner,” said Mamia. “The lagoons are way clearer. There’s a beach in Raro called Muri, around it are a lot of resorts and tourist attractions. The lagoon out there used to be so nice back in the day, but the area got really populated so the lagoon got really murky. Over lockdown there were no tourists, nobody using the beaches, and now the lagoon looks really nice. It was well needed for the environment,” said Bree.

“It was really good seeing heaps of tourists back on the island though over the break. There were so many,” said Mamia. “It was like a ghost town over lockdown. All the resorts were empty, and you’d see people cleaning them up sometimes, but it was like, for what?” said Bree.

I asked the gals about their favourite aspects of Cook Islands culture. “Dancing, because I grew up doing it. It’s really hard to do it here, there’s hardly any cultural nights,” said Mamia. “The biggest difference between here and Raro is the weather. There are also big buildings everywhere, a lot of traffic, and more white people. The longer I’ve been here, the more I think Dunedin is like New Zealand’s own little Rarotonga. Coming to Dunedin feels small, like Rarotonga.”

“What sets us apart from other Pacific Islands is that we’re very vibrant. We use a lot of colours, as all Pacific islanders do, but we are very loud and outspoken,” said Bree. Mamia said that she misses “the food, dance, and family” back home.

I also asked the ladies about what it’s like to be Pasifika in Dunedin, in tertiary spaces like the University and Polytech. “I really like being a Cook Islands student at the Polytech. I get to show off my culture to others,” said Mamia. “You don’t see many Cook Islanders around, so when you say you’re from the Cook Islands, people are interested by that. It sets you apart,” said Bree. “Yeah! My classmates all booked their flights to Raro when I got back from my trip recently” said Mamia. “It’s also really cool to feel a part of the whole Pacific community down here. It’s cool to be Pacific at this uni, especially in such a white space. The Pacific Islands centre is a good place to feel at home,” Bree said.

If you want to learn more about the Cook Islands culture during the language week, OCISA has a stacked lineup of events running. Head over to their Instagram (@ocisa2021) to see the highlights.

“We’re having an ei katu workshop on Monday from 12pm-2pm at Union hall. Ei katus are flower garlands that you put on your head, part of traditional attire. They’re for the ladies but can be worn by men too,” said Bree. “Mamia is running ura class on Wednesday from 12pm–2pm at Union hall, which is a traditional dance [and] will be lots of fun! We’re hoping to have drums too,” said Bree. “We’re having a social on Thursday night at Starters Bar, with DJ Dalboy. And on Friday we’re having a Kuki Kaikai, a big feast, over at the Pacific Islands Centre from 2pm–3:30pm. These are all open to everyone!”

Here are some common phrases and useful words you can use during Cook Islands Māori language week: