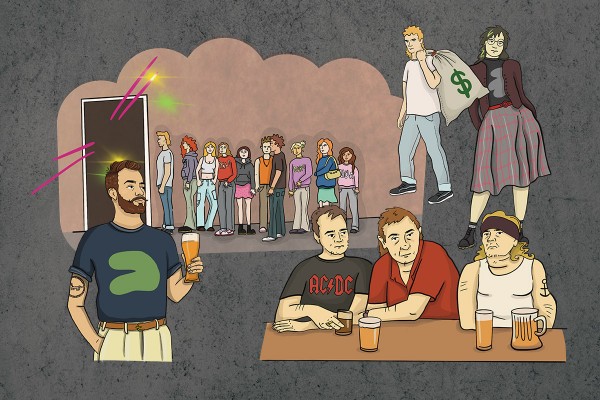 Dunedin venues have slowly been disappearing thanks to the boomer-fearing bureaucrats who run this city. There is current controversy surrounding these venues and noise control and it’s now more important than ever to support our local venues and musicians. So here you have it, a definitive ranking of all of Dunedin’s music venues, and what to expect at each gig.

Posters of the late great bands of the classic Dunedin Sound line the walls, in contrast with the odour of beer and BO. Rumour has it a quite well-known band The Rolling Stones (not from Dunedin) did cocaine upstairs here back in the venue's heyday. Nostalgic and a blast from the past.

Usual suspects: Those three middle-aged men you hope you don’t end up like who sit at the bar drinking beer, your friend’s classic rock band you always promise to go see but don’t

Dog With Two Tails (aka The Dog)

The Dog With Two Tails has been a classic hang-out spot for decades. This alternative jewel, nestled on Moray Place, is the current bane of law abiding, sound sensitive city residents. It’s also home to high schoolers with proud nicotine addictions. The Dog provides friendly service, tiny baked treats, and an open mic night on Wednesdays.

Doing drugs in the bathroom capability: Reasonable facilities but leaves you feeling grotty

Alty Status: One of those classic bicycles that makes you feel like you’re in a french romance film.

Dive is arguably the best-equipped venue in Dunedin short of the Town Hall or the Stadium. The vibe is slightly confusing, with the name change related to decolonisation, but a very large portrait of Captain Cook seems to contradict this. The stage is a little small. The male bathroom has no vaping written on it in pen, and if that doesn’t deter you, nothing will.

Usual suspects: Whoever has enough money to buy a ticket to a gig, people who enjoy expensive alcohol

Doing drugs in the bathroom capability: The lock is broken and there is an explicit handwritten sign as a warning, but if you manage to pull it off, the reward is huge

Let’s be honest, no one goes to U Bar unless it’s for Wednesday Pint Night. The stage is massive, and there is a decent amount of room to mosh comfortably. The drinks are affordable, and it’s a reliable spot for a good time.

Doing drugs in the bathroom capability: I have seen it happen with my own two eyes on many occasions, socially acceptable

Alternative status: Basic (though it is cool how all the bands who have played here write their names in the green room)

Nestled beside each other in the valley, Inch Bar and Adjo are two tidy little venues which are ideal if you live in this part of town. Both provide nice beer and tiny areas for performers. Think of it as the Inchbar being an older, wiser, wordly brother and ADJO the younger, freer, outgoing younger sister.

Doing drugs in the bathroom capability: Skip the bathroom and head out onto the street around the back for a sneaky joint with your friends and some guy who claims to know all the members of the band playing