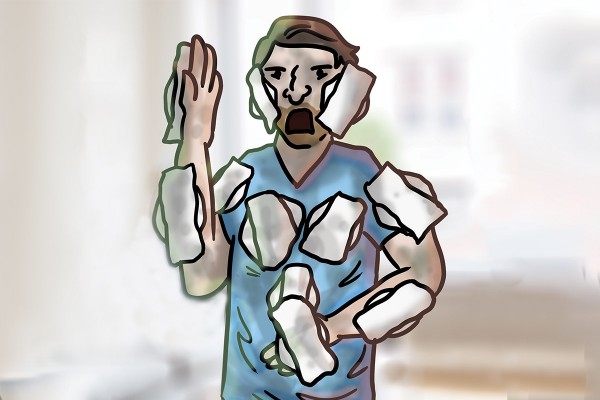 What do MEN know about MENstruation?

Men don’t talk much about periods. Some think women wear tampons all the time “just in case”. Most think the pad sticks to the inside of your thighs. The idea of talking about periods seems to make men instantly flustered. We took to the streets and designed a little competition. Critic Te Arohi called up a man, asked him a question about periods, and then asked him to nominate the next man for us to ask, gaining or losing points depending on the accuracy of their answer.

The contestants consisted of: Jono, Jack, Ethan*, Sean, Hunter, Pots, Alex, Gabe, and Gabe’s Dad. Their answers are as follows.

Question: Can you explain to me what a period is and how it works?

Correct answer: Simply put, a period is the discharge of blood and tissue out of the vagina. Every month, the uterine lining thickens in preparation to grow a baby. If no egg is fertilized, the body sheds this tissue and introduces a new egg. This process is triggered by hormonal changes, which can affect mood and energy levels.

Jono: “Can I Google it? I don't really know. It is a monthly bodily cycle of … uhhh … expelling the egg from your uterus for, I dunno, a reset. You gotta get rid of the old egg so you can make room for a new egg so it comes out of the vagina every month in a big bloody mucus filled mess. Isn't it like the lining of the uterus strips itself out? Like a pack liner? That's pretty much the best I got. I know that it doesn’t follow the moon, that's a misconception.”

Critic says: For lack of a better analogy, yes, it is sort of like replacing a pack liner. Kudos for not thinking periods are like werewolves.

Jack: “It’s the sloughing of endometrial cells due to hormonal changes.”

Critic says: The two women laughing in the background were all we needed to hear. -1.

Hunter: “Oh shit, you got me. Okay, you have a 28-day cycle. And in those days, there are variations in oestrogen and progesterone, and your body is preparing to become pregnant. And it balances those hormones. Ah shit, I don't know the correct nomenclature. You've kinda got me here. Essentially, cells come down from the ovaries into the uterus lining. If they're not inseminated, then they die? Something about hormonal mood changes.”

Critic says: Only one to know the hormones, nice.

Pots: “Oh it's like, breaking down of the ovary or the egg, after every month or so? Part of the egg comes out? The broken down egg, I think. I don't really know aye.”

Critic says: It’s definitely not the breaking down of the ovary. That would be bad. -1.

Alex: “Well, in layman's terms, every month the uterus sheds its lining because the egg doesn't get fertilized. It is then pushed out of the body.”

Critic says: A man confident enough to say “in layman’s terms” has got to know his stuff.

Gabe: “Uhhhh, like a fullstop? Oh you mean a menstrual period, right, okay. Oh, oh my god, I should know this. Think back to year ten health. Oh god. It’s something about the egg. That’s what the egg is, yep. Let me think. It’s if the egg hasn't been fertilized and that's sort of the waste? Clutching at straws here, mate, but you should call my dad and ask him.”

Gabe’s Dad: “It’s the lining of the uterus sloughing because an egg hasn’t been fertilized.”

Question: How much does a box of six tampons cost?

Correct answer: They don’t come in boxes of six. A man wrote this. A box of 16, though, comes in at about $4 from Countdown.

Alex, for saying “far too much. $4? I reckon they should be free.” Alex gets a point for being woke. Hunter missed the mark with a guess of $8-10, but gets a point for saying that “it’s fucked up that condoms are subsidized as a sanitary item, but tampons aren’t. I mean c’mon.”

Question: How often should you change a tampon?

Correct answer: Change your tampon every four hours, not to exceed eight hours.

Got it (three or more times a day): Jono, Jack, Ethan, Pots, Alex

Didn’t get it (less than that): Hunter, Sean, Gabe, Gabe’s Dad

Ethan got it right, suggesting 3–4 times a day, or “until the river runs dry, I guess.” Pots suggested “they just change it whenever they go to the bathroom I reckon” which he reckoned was at least three times.

If Hunter got periods, he’d be dead. He suggested changing a tampon once “every one to three days”, though he did note that it should “not exceed seven days, because that’s what you start to run the risk of infection.” Technically true. You definitely, under no circumstances, should leave a tampon in for a week. “I heard a story of one lady who did and apparently she got a gnarly infection and it smelled real bad. Or something.”

Despite Gabe’s “experiences dating women”, he wasn’t sure of the answer, but guessed about the right amount. He doesn’t lose a point. Gabe’s Dad suggested twice a day, but “it depends on the flow, which is heavy or light depending on the stage of the cycle”, which is true, but not the number we’re looking for. But only Hunter loses double points here, because again, he’d be dead.

Question: What happens if you don't change the tampon?

Correct answer: Bacteria start to interact with discharge. Best case scenario, this can lead to an odour and a minor blockage. Worst case scenario is Toxic Shock Syndrome (TSS), a potentially fatal illness caused by a strep or staph infection. It causes fever, fatigue, and “skin that looks like it was scalded by boiling water.”

Got it: Everyone suggested infection, so everyone gets a point.

Didn’t get it: Ethan and Sean lose points, because we have to have losers here.

Everybody mentioned infection, so everybody gets a point. But Alex and Gabe’s Dad get the bonus point for being the only ones to mention TSS. Said Alex: “I used to sit on the toilet and read all the Libra facts, and then when I was out of facts, I’d read the warnings!” Cute.

Ethan got the most flustered, and said “maybe it just gets ... I dunno! If you don’t change it … fuck. Um. I dunno. Infection or something? Maybe it falls out. No? No. Cross that one off.” Sean said “I’ve got no idea what happens if you don’t change a tampon.”

Final Score and Bonus Question: Before Uni, were you ever taught about menstruation in a classroom? The results were shocking.

1st: Alex “Nope, never before uni. Not even mentioned, really.”

2nd: Jack “Never at high school. I went to an all boys school, they literally never brought it up. But learned lots in health sci since then.”

5th: Gabe’s Dad “Back in the UK in the ’80’s and ’90’s, I guess it was pretty taboo. Learned about it in biology, and I remember a great stand-up routine that questioned why we could advertise cigarettes on TV but not pads.”

6th: Hunter “Yep I was taught. It was pretty poor, only one day of class in sex ed with Ms. Anderson, an 80 year old lady.  I think it was mainly cartoons.”

8th: Ethan “I went through a pretty Christian school. It was kinda taboo, in that setting. It was mentioned in sex ed, but it was pretty weird. We couldn’t talk about sex or anything.”

9th: Sean “Yeah, I was taught in high school. It wasn't something that everyone did though, I selected to do biology.”