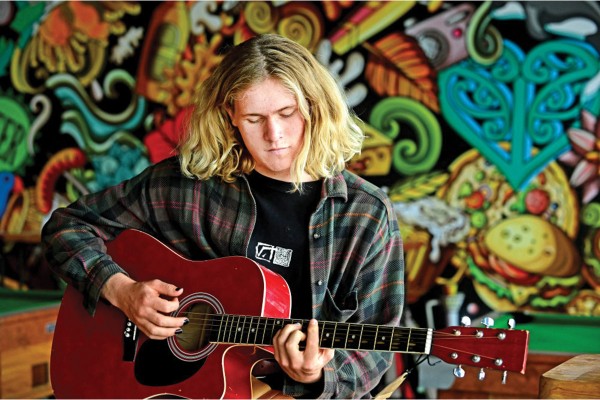 Local Produce: Sam Charlesworth: A Bedroom Is All You Need

Sam Charlesworth is a fresher studying Studio Production, Marine Science, and Te Reo Māori here at Otago. With just “a few mics and an interface,” he has recorded a huge amount of music and has recently started playing gigs around Dunedin.

Sam records all of his songs without using a studio, opting to record in his Selwyn college bedroom. “I’m doing studio production here to try to get studio quality music in my bedroom and save a shit ton of money. You don’t have to pay for an engineer and a producer and all that shit,” he says.

Although he has been playing the guitar since he was three, Sam hasn’t had any formal musical training. “I kind of taught myself just from fiddling around and trying to figure out how to make different chords. I had a piano lesson when I was like three or something.  I think it gives you a unique approach to music, you can write stuff that people who are more theory based don’t think of because you’re just writing what sounds good to you,” he explains.

Sam says that recording in a residential college has its challenges, “it can be a little difficult recording in a tiny room sometimes,” he says. Alongside recording, Sam is also pretty efficient when it comes to writing songs.

In terms of his method, he says he “never really starts out with a set idea of a song. You get in a kind of mood and you just let all that stuff you’ve absorbed just come out.” His passion for songwriting means he’s generated enough content to continuously release new tracks. “I think I’ve got so many albums because as soon as I write something I’ll just record it and try to get it to a good enough standard to release.”

His set-up is fairly cheap and easy. “I released an album of ten songs which were all recorded on GarageBand on my German exchange student’s laptop. It’s pretty crazy because I listen back to them and they’re just terrible recordings, I had no idea what I was doing but some people seemed to like it so that was cool.” He doesn’t worry too much about dampening. “It’s kind of cool to have a bit of reverb, it makes the vocals sound a bit lo-fi. A couple of times I’ve hung up a bunch of sheets, but it’s not really a big deal.”

Recently he’s collaborated with his mate Sophie to make a few songs, including a single he’s about to release called ‘Look Mum I’m on TV.’ “We’re trying to get it out for NZ Music Month. It should be out at the end of May, or maybe next month. We might do a music video for that one too.”

Most of his music videos were done by his mate at high school who was into film. One video for a song called ‘The Difference Between’ focuses on men’s mental health “I didn’t know half of the people aye, my mate just set up a little party and was like have fun and we’ll just film.”