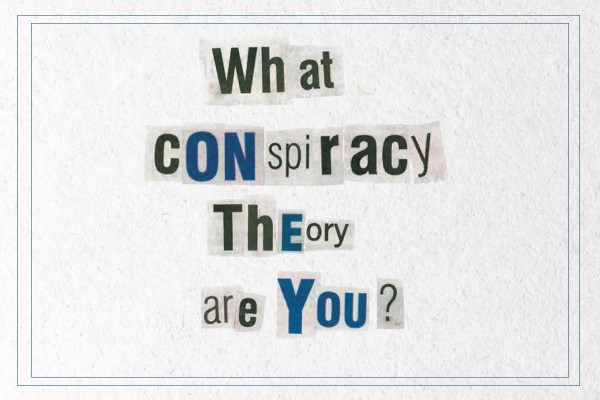 What Conspiracy Theory Are You?

1 - What is your favourite Wii Sports sport?

2 - You get glandular fever but the wait for student health is three weeks, what do you do?

5 - How’re you getting that essay that’s due tomorrow done?

7 - What’re you ordering first at Maharajas?

9 - Which one of these do you have that you should really throw out?

Mostly a): The CIA Killed JFK

Listen, I get it. Out of all the big conspiracy theories this one makes the most sense. Any Wikipedia Cold War historian will tell you that after the failed Bay of Pigs invasion of Cuba, and JFK shut down Operation Northwoods, the CIA acted all kinds of sketchy in the ‘60s, and no doubt hated JFK. But that doesn’t mean they were behind his assassination, and there is little evidence behind this. Why focus on a conspiracy theory about the CIA when you can focus on all the fucked up shit that they have actually done? Operation Paperclip, MKUltra, torture, death squads, and the actual assassinations of multiple world leaders. Go talk about that shit to your friends. Mainstream conspiracies are boring dude.

The thought that there is alien life out there is terrifying. The thought that we are completely alone in the universe is equally terrifying. We get it, you’re lonely. But you can believe that there are aliens somewhere out there in the universe without putting on a tinfoil hat and storming Area 51. You believe people, maybe even yourself, are being experimented on by alien probes because you are struggling to find meaning in this world and think extra-terrestrial interference is an enticing alternative to a meaningless life on earth. Alternatively, you’re just into some kinky shit and if that’s the case who am I to stop you.

The idea that a global elite cabal wants to control your mind, body, and freedom through 5G, coronavirus, vaccines, and lockdowns is more comforting to you than the idea that some slight discomfort and inconvenience to you personally may be necessary for the betterment of society at large. Your vapid, conceited, narcissistic personality complex maintained by your Instagram and blog require that you are the one being oppressed, you are the one being targeted by the government, and only you can save everyone else with this truth that somehow only you know.

Have you been under a rock for the last few years? We’re fucking up the planet dude. Anthropogenic climate change is real, unprecedented, and poses drastic implications for the future of us and our planet, and a cold Dunedin winter is evidence for, not against, the scientific consensus. Don’t give me any of that “natural ice age” horseshit, you’re problematic and should limit how much you post on Facebook.

You’re not worried about climate change or global pandemics. You just wanna get jiggy with the idea that the King of Rock and Roll is still out there drinking mai tais and crooning away. The notion that Elvis never died, and instead went into hiding, is backed up by irrefutable evidence like guests at Legoland seeing Elvis impersonators and thinking they were Elvis, and someone vaguely resembling Elvis appearing as an extra in Home Alone.