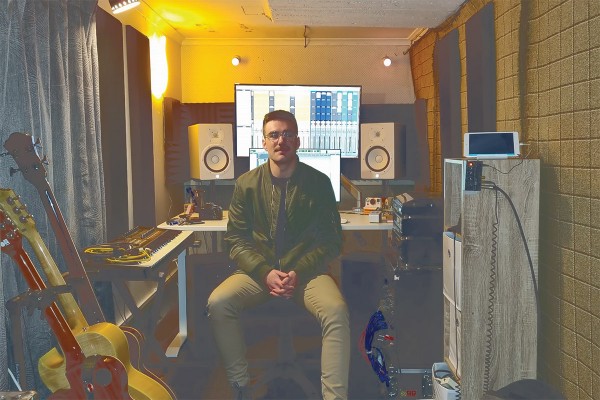 André Theis is a local producer, working from a studio in his North Dunedin basement. He spends his days recording, mixing and mastering full-time with an ever expanding list of local artists.

André started the studio as a Uni student, first making music out of his flat bedroom. “I started in my bedroom at my flat with just some speakers and a laptop. Me and my other flatmates would basically just piss off our other flatmates by staying up to ungodly hours just making all sorts of music.” His current studio was discovered by a happy coincidence, “basically I just came to the garage, saw this little side-room and was like ‘oh this could be alright.’”

André says that studios in Dunedin can be hard to find. “There’s a couple of places, obviously there’s the Uni studios, which is great because they’re brand new but usually it’s out of students' price range unless it’s part of their course.” he said. André doesn’t really see other local studios as competitors. “I’ve worked with Peter Muldino who has a similar set up, but he’s not really a competitor or anything, we have different approaches and goals and aims. It’s quite hard to find more studios in Dunedin anyway.”

André also thinks that the music industry is changing, especially when it comes to people’s ability to create music on their own. “It’s definitely changed recently, if you know what you’re doing with software and you’ve got a good sounding room, or a good sounding bedroom, then you can make a professional sounding hit. Little home-style studios are almost the way of the future I think. Some of the big ones [studios] have definitely struggled just with the cost of staying up and running” he said.

Although equipped with an incredible set up now, André says establishing his studio has been a gradual process. “It’s definitely been a gradual thing. I was in high school and working three jobs so I had a bit of extra money so I was like ‘oh yeah, might as well invest in some music gear.’ So I bought a mic and an audio interface and all that, so that’s how it started” he said.

André works with a variety of different artists, and takes a certain approach to how he produces and collaborates with musicians. “It’s definitely all in the way you do it. One of the differences with other producers is I really try to push the artists and challenge them, especially with vocals. A lot of what I do is recording vocals because that’s what I love doing and I don’t really have a problem with saying “hey let’s do that again.”

A lot of it is about getting to know the artist. “Once you build up a relationship with them it makes it a lot easier to go ‘you can do better.’” We always do lots of takes anyway, that’s the reality of trying to get your best performance, because it’s going to be out there forever once it goes up on Spotify or Sound Cloud.”

André records a diverse range of artists “I did a country folk song. Any genre that’s out there I want to do. I don’t have a preferred genre but I learnt a lot doing a lot of hip hop, RnB and pop. But I love recording bands, it’s a really fun thing to do because you get to work with multiple people.”