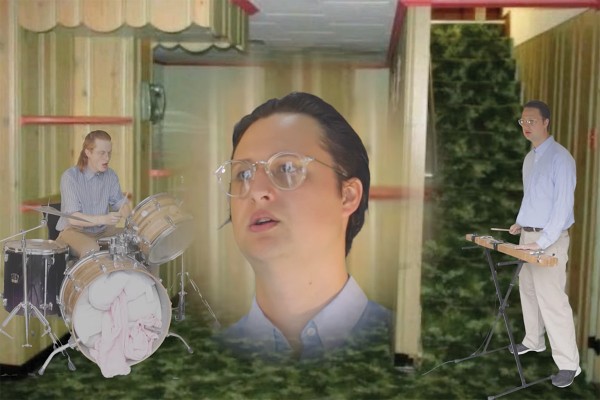 Night Lunch are a Dunedin duo of Liams made famous by the smash hit music video for their song House Full of Shit. The band features the uniquely minimalist combo of Liam Hoffman on drums and Liam Clune on a home-made instrument called a diddly bow. Hoffman has finished Uni but Clune has come back for round two. They’ve so far released two albums on Spotify: ‘Double Trouble’ and ‘Table for Two’.

Clune initially just made the diddly bow for fun. “I had seen some things just on Youtube of people making these things, they looked fun to build and easy to make. I didn’t really think I’d make a full project around it. There were a few prototypes made out of chair legs and other things, and some bits from an old landline phone. It fell apart.”

They recorded their first album in the Attic in Dunedin. Clune recalls, “we just recorded some of the vocals at my house, I was using a couch to deaden the audio. We were having drinks at the time, so a bunch of people were just sitting around watching me scream into a couch for a half an hour.”

For their second album, they followed their fave engineer Stephen Marr up to Roundhead Studios in Auckland. Hoffman liked the contrast: “It was a real nice, swanky studio. It was fun creating real grotty music in it.” Clune said, “It was funny bringing this shaggy-as piece of two-by-four into this prestigious place.”

Hoffman has a sensational mullet. He is quite attached to it, “my partner she trims it, I’ve had it for two years now. It’s part of me.” Clune believes it gives Hoff supernatural powers. “It’s like Samson from the Bible who gets all his powers from his hair. That’s probably what will happen to Night Lunch, you cut your hair and it goes to shit,” he said to the other Liam.

Their music video for House Full of Shit has been a big hit. Clune’s iconic wet face look in the video was achieved with vaseline. “Speaking of that video, Hoff did all the work on editing the video which he forgot to credit to himself. I just put vaseline on my face and lip-synched,” Clune said.

The pair enjoy both performing and recording. Hoffman says he “just loves hitting the drums really fast and also it’s really fun coming up with songs. Seeing people boogie is the best bit of performing.” Clune has similar reasons “I love the performance part, we definitely have a telepathic link when we’re on stage.” This metaphysical connection manifests in the best stage banter in the country.

Using the diddly bow can be challenging for Clune at live performances. “I break strings a lot that’s for sure. Now that we’ve got more than one diddly bow we can just bring an extra along and swap them out.” He uses fuzz and octave pedals to beef up the sound. The diddly bow concept really came together when Clune hit on using two strings for the instrument.

Hoffman said that they have “a really nice diddly bow” which Clune’s dad made. “We call that one a daddly bow,” says Clune.

Their live performances, like the music video, are high intensity. Hoffman reckons he almost passed out during one gig, due to his habit of holding his breath while drumming. He says: “Yeah it is tiring. But also you’re pretty high on the adrenaline. It is pretty scary getting up there but once you do it’s a good buzz.”