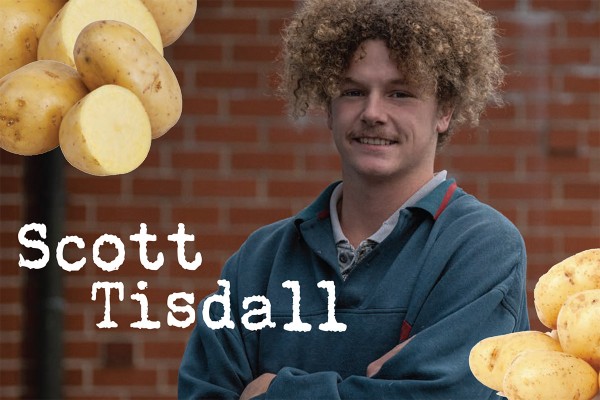 Scott Tisdall is an Otago student who moonlights growing moonlight potatoes on his family farm. Using Instagram as a platform, he is gradually expanding his operation to bring locally grown potatoes to the tables of starving students. Last season, he gave 33% of his profits to the cancer society. We asked him a few questions to see what he was all about.

Why are you selling potatoes?

Money’s a big part of it, just to help with uni. I’ve always been interested in business, even though I’m not doing a business degree I thought it would be a good way to keep it in my life. And I had all the stuff to do it at home so why not? The creative aspect of being the marketer and salesperson is quite fun because you don’t have anyone to tell you what you can’t do. Experimenting with promotion on instagram is fun.

Where do you grow your potatoes?

Middlemarch, on my parents’ farm. The potatoes sit right under an irrigator so my parents don’t really use the land for anything and it’s nice and damp for the potatoes to grow.

How do you harvest them?

We’ve got a harvester, it’s ancient, it looks a hundred years old. It’s from one of my uncles. It scoops them up and makes it easy when it works. I did have it break down a few times and ended up having to get a plough to dig them out and sort through the dirt.

How do you find customers?

I mean a lot of it’s just my friends and people I know. The Instagram page does help, I try to be funny on there so people might tell their friends about it. Other than that it’s just emailing cafes or having drunk yarns with people about potatoes.

I would say roasted, boil them in quarters for a bit and then roast them in some butter. It’s heaven, the outside is crunchy and the inside is soft. But there’s so many other good ways. That’s the thing about them, they’re so versatile. You can eat them healthily, you can eat them dripping in fat.

Do you think KFC uses real potatoes in their mashed potatoes?

Look, from how good it tastes I would like to believe it does. Tough to say though. Whatever they’re doing though they’ve got a good recipe.

Do you plan to expand?

I want to sell to more businesses because they have a steadier demand, but there are a lot of regulations that you have to start to consider at that stage. In terms of production each year you get to keep more and more little seed potatoes, which you use to plant next year. It’s like exponential growth in that way.

There’s no demand problem, last year I sold all my potatoes, it’s more just a problem of having enough potatoes to sell.

What happens when you run out of space?

I do have this one idea that I’ve tried before, where you can actually grow potatoes in a hay bale. You just put the seed potatoes in the bale with maybe a little soil and give them water. That way you don’t have to dig them out of the ground.

Do you have any advice for someone trying to grow potatoes at home?

I don’t want to make any competition. Nah it’s pretty simple, if you’ve got dirt you can grow potatoes.