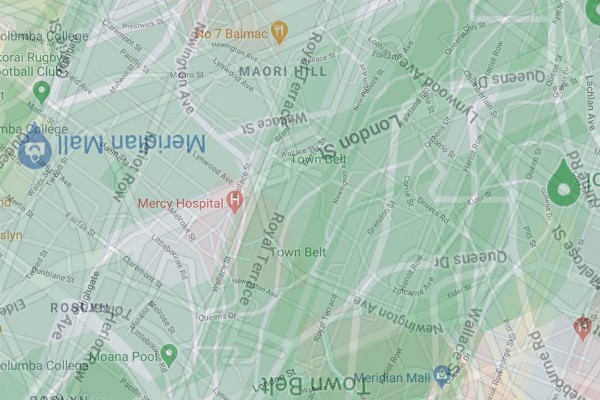 For the love of god pedestrianise George Street already, you want to see the drama of Lee Vandervis’s reaction when the motion passes at council

Dunedin was largely planned out by settlers that were probably way too deep on Scotch and Irn-Bru. In that state, they thought that a street with a 35% incline would be a funny meme. They literally tried to superimpose Edinburgh onto the Otago landscape, stubbornly ignoring all of the hills that Edinburgh did not have.

Despite that, the Dunedin of decades past was far more walkable and accessible than today. Cars didn’t dominate the streets until well into the 20th century and the city was actually the second in the world after San Francisco to introduce cable cars. There were also electric trolleys, ‘comfort stations’ all around the city, and the beautiful Dunedin Railway Station actually had trains going to useful places rather than just carting tourists around the Taieri Gorge scenic route.

North Dunedin is hardly the least walkable place in New Zealand. In fact, it’s probably one of the best, but that’s a very low bar. Residents of the so-called student precinct do walk most places, but we also barely leave our small radius to venture anywhere South of the Octagon, which I think is genuinely sad. There are so many things Dunedin can do to be better for climate action, accessibility, equity, wellbeing, and — before any Dunedin News boomers reading this who don’t care about any of those things fall asleep — the economy. Here are a few.

The protected lanes that run along Great King and Cumberland Street are great, but no-one’s entire cycle journey is a straight 1km strip. There are points where the cycle lanes just end abruptly, or cross to the other side of the road, not to mention the glass on the lanes. If people are going to feel comfortable cycling in Dunedin protected lanes need to be comprehensive. Given the hatred many motorists seem to have for cyclists in Dunedin, I’m not using my bike to get around anytime soon.

Put a zebra crossing on Albany St. crossing the road from Central library to Poppa’s Pizza, the Clubs and Socs centre, or anywhere south of there is a nightmare at rush hours

It’s both annoying and genuinely dangerous. The DCC and OUSA have been “discussing” this since 2019 but have not committed to anything yet. Honestly though, how hard is it to paint some fucking lines on the road?

It’s practically pedestrianised anyways during O and Flo Weeks, and this would extend the walkable zone of Uni campus by a block.

I’m no urban planner but I don’t personally think having State Highway 1 running right through the tertiary precinct (via Great King and Cumberland street) is a smart idea. It makes walking, cycling, and scootering unsafe. It also produces an awful stink every time a sheep or cattle truck drives through.

Most of it is unnecessary traffic too. Those sheep trucks aren’t stopping at the Uni or your flat on Forth street, they’re just taking the highway to their destination. Redirect the highway away from the tertiary precinct, something that should be done anyways because of the hospital rebuild. Having it where it is currently is not only dangerous, loud, and unpleasant, but entirely unnecessary.

They’re pretty, and trains are cool. Also, trains are great for lowering emissions and increasing accessibility. Why stop there though? How about convenient, accessible, and affordable train journeys to Christchurch and Queenstown.  All I want is to be able to walk from the student quarter to the railway station and get the hell out of Dunnaz on a passenger train for less than the price of a bottle of Midori.

Now, if your name is Lee Vandervis, or if you’re reading this on Dunedin News, I’m going to need you to take a deep breath and count to ten. We wouldn’t want you to have an aneurysm now, would we?

Despite fears that repaving George Street and banning cars would make it less vibrant and cripple the businesses on the street, evidence shows that if done correctly, it would have the exact opposite effect. It is understandable to be wary of major changes to the place you live, work, or travel through. It is understandable to be concerned for local businesses in your area. Denouncing any suggestion of an evidence-based approach to city planning as “carphobic fascism” is just fucking stupid though.

Studies everywhere from the UK to Singapore to Colombia have shown that the benefits of pedestrianised streets include lower pollution levels, lower road deaths, less crime,  convenience for pedestrians, convenience for motorists (as overall congestion in the city falls), and yes, increased sales for businesses — as well as increased employment.

If countless peer-reviewed studies from around the world aren’t your thing though, there is visible evidence within New Zealand too. In the 1960s, public pressure led to the middle section of Cuba Street in Wellington being pedestrianized. Ever since, it has been the hub of the city, and a prized location for any customer-facing business. I can’t promise that if George Street is pedestrianised it will immediately become Cuba Street. I’m confident though, that if done correctly, over time, George Street will be safer, more equitably accessible, less polluting, more economically active, and more vibrant and friendly to everyone in our little city.