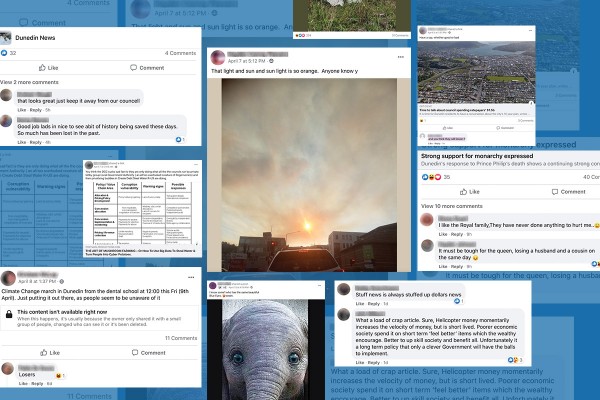 Dunedin News, the original news group for Dunedinites, is infamous for its (il)liberal “you will be kicked out if the admin does not like you” policy. There is a strict list of offences that will get you kicked out, all of which are broadly interpreted by Daryl Taylor, the page’s admin and an ex-dog catcher.

The outcasts from Dunedin News still want experience having their amygdalas hijacked by Mark Zuckerburg, so they have banded together in various smaller Facebook groups where they give meaning to their lives by venting about local politics. These groups have boldly attempted to wrestle away Dunedin News’s stranglehold on Local Content Posting and redefine it for their own, varied, ends.

“News of NOT just Dunedin, anything goes really, just don’t be dicks to each other!! if you don’t like a post - Jog on, thanks”. Dunedin News Uncut is the original group for the outcasts of Dunedin News and it promises to be a free for all. It’s also the largest splinter group, with 15,000 members. Unfortunately, this means that Lee Vandervis posts in the group in the same way he does in Dunedin News.

The unfortunate truth about Dunedin News Uncut is that it has exactly the same toxic vibe as Dunedin News, just on a smaller scale. Posts about the recent climate strike get more haha reacts than likes, and school strikers are described by commenters as “anti-motorist fascists”. A particularly insightful commenter suggested that “protests create pollution noise an wen they breathe so mayb shuld b banned too lol.”

Power ranking: A live action remake of a bad movie that ends up being worse than the original

“Dunedin is the best little city in the world,” says the about section of What’s News Dunedin? This is the only group that can accurately be described as wholesome. Some people post photos of baby goats, and other people post photos of their fireplaces. There are 5400 members, but the moderation team is effective at stopping abuse despite the group being very active.

At times though, the posts are cringe. Activities like “wondrous weekly Wednesday Window on Dunedin”, where members post pretty photos of Dunedin, might create a respectful environment but they do not quench my thirst for petty drama in a community Facebook group. This post of an elephant terrifies me and I do not know why it made its way into the group.

Power ranking: A blue-eyed elephant that seems happy but might murder you in your sleep

This group has a LOT of rules. One of them, “NO SLAGGING OFF OTHER PAGES OR ADMINS FROM OTHER PAGES. WE ARE JUST HERE FOR THE NEWS”, hints at the conflict that has brought people to create so many Dunedin News-type groups. The vibe of the page is frankly violent.

On a post about the teenage fighting at the Dunedin bus hub, “With the way the world's going and all the anti police!!! What do people think they do something they doomed they don't they're doomed.” I have no idea what this means, but it sums up the boomer-ish yet hard to understand vibe of Dunedin/Otago News. Most of the posts are about young people (read: people under the age of 30) doing crimes. One member suggested: “bring back the borstals the young people prisons and maybe it will stop these young ones doing this.” Another said “I can see people thinking they can get away with it or you can see mercy for a foolish, senseless , awful act of a young person.”

Power ranking: Being sentenced to death by a jury of boomers who can’t spell

The first post that greeted me in Dunedin News Uncensored was titled “Former Pfizer VP Speaks Out on Dangers Of mRNA Vaccines & Covid Illusion”. Another post was titled “GUNS METH & COVID How One Crisis Fuel Another.” People are also sharing links from 1080 Eyewitnesses. “We won't ever remove anyone for their opinion! Everyone is entitled to an opinion!” reads the ‘about’ section of the page.

Dunedin News Uncensored is simply a conspiracy group. There are 1800 members, which is terrifying, and gives the page a threatening aura, even when it’s making incomprehensible posts combining Rogernomics, mushroom farming, and stealing water.

Power ranking: The threat of Facebook to our democracy and critical thinking ability

Dunedin News is relatively high in the power ranking because it has the same name as Dunedin News but is not the original Dunedin News group. A big power move right from the outset.

The name is the only reason Dunedin News made it this far. The posts are weak. Themajority of posts are just people looking for lost scooters, cats, and shopping trolleys. They’re simply not engaging in The Discourse the way they should be in a community Facebook page. The group description sums it up: “Post whatever you want news related on this group:)

“Real Dunedin news for people who just want the news”. The focus of this group seems to be reposting newspaper articles. They’re strangely quiet.

In Dunedin News Uncut, news of Venod Skantha’s death in prison created a stir with hundreds of reactions and comments. In Real Dunedin NEWS 📰, which has a decent amount of members (3600), the article got only one like. There’s a tinge of conspiracy, with comments like “U sad folk can’t c he’s rite ,go Leah” in support of Lee Vandervis’ dispute with the DCC. Overall this could be a group the ODT started to promote their own articles.

Power level: Quietly reading the ODT and nodding to yourself

Dunedin News uncut (official) is a small replica of Dunedin News Uncut, maybe for the outcasts of that group. It is a splinter of a splinter group, even though it proclaims itself official.

On a post about the DCC consultation process, “and you think they will lission ?” wondered commenter Nigel Walker. The truth is that no one is lissioning in Dunedin News uncut (official). The group is mainly composed of advertising posts from Chand’s Pride and Shine Mobile Car Grooming, who are “a locally owned and operated mobile car grooming business located in the Otago region”, rather than news about Dunedin.

Power ranking: Remembering that I need to vacuum my car