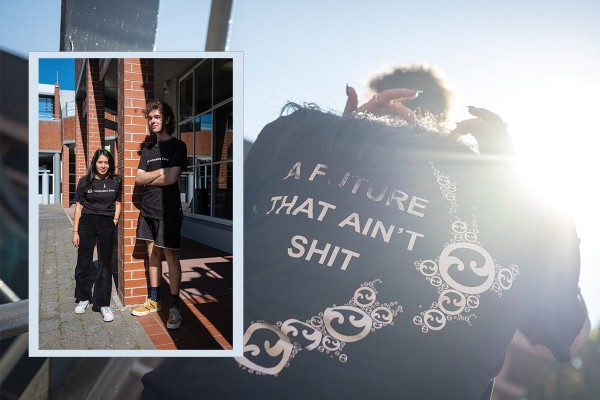 Generation Hero: How Gen Zero are taking on climate change

Climate change is a scary subject. As concern has grown, so has the number of environmental organisations and people willing to take on the challenge of our generation.

One of these organisations is Generation Zero, a non-partisan group which focuses on a solutions-based approach to climate change. Generation Zero co-convenors and Otago students Pippa Chang and Jett Gannaway are part of Gen Zero.

“We work with and make submissions to the Dunedin City Council, the Otago Regional Council and are getting involved with SEA (Students for Environmental Action) on campus. We do loads of student based activities and online submissions, while taking a friendly approach,” says Pippa.

Generation Zero has been having an impact on the local community through their work getting projects such as the Otago Regional Council’s (ORC) $2 bus fare over the line, working with the Dunedin City Council (DCC) on the proposed changes to the tertiary precinct, and supporting organisations such as the Orokonui Ecosanctuary.

“When the ORC introduced the $2 bus fares we submitted on that and wanted to ensure it was more accessible for students. We’re making sure that the Otago Regional Council climate change policies are taking a human response, [and] it’s not just because of politics. We want to make sure there’s a contingency plan for the future,” she said.

Jett says Generation Zero also focuses on ensuring that climate activism and education is accessible to everyone, especially students and young people who may not otherwise know how to grapple with the topic. “We are focused on education and engagement with the community. When the DCC puts out a consultation, it's really unsexy to go submit on it if you don’t know anything about it,” he said.

“They use complicated language so we put it into simple terms which represent the population, especially youth and students. The DCC doesn’t do that for us.”

He also explains how intimidating it can be to take on such big organizations. “The DCC, the University and the ORC are slow moving, large organisations. When you’re up against them and disagreeing, that’s a confronting thing. Maybe you and five others are working against a multi-billion dollar institution, but it’s community building which is really important. We want to run a positive, forward-thinking campaign,” he says.

On top of all this, Pippa, Jett and the rest of the Generation Zero team struggle with being a young person and dealing with climate change deniers. “Climate anxiety is real. All the young kids care about it, which you can see with School Strike for Climate. We’ve had to kind of build-up walls, some opinions can be harsh,” Pippa says.

Despite this, Pippa believes that there is hope for the future, especially with all the work young people are putting in across the globe. “Look at people like Greta Thunberg, climate change is in every news outlet. We’ve got to keep it going. If you get one person to change their mind a day that’s something. We’re stepping forward, and will keep going from there,” she says.

Jett agrees. “We have a strong wellbeing focus and team as part of our organization. It is a scary and confronting issue which will affect many of us in our lives. But someone’s gotta do it.”