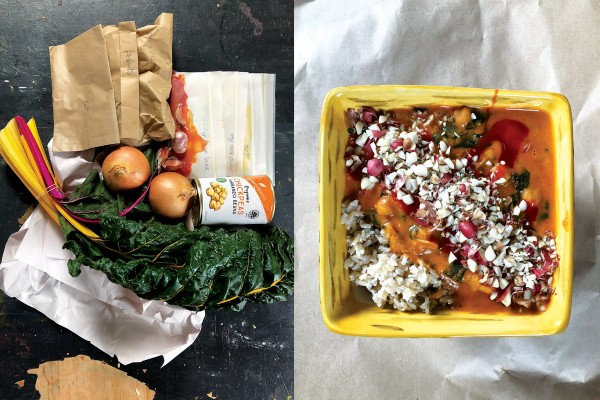 So sustainable it’s almost a meme of itself

Let me tell you that this box fucking slaps.

Taste Nature is an organic food store (and much more) located by the casino. It’s a bit out of the way for your average student, but that’s okay, because the people who may be interested in an organic, plant-based meal box are the same people who would travel more than four blocks from their flat to get some food. Taste Nature also does deliveries.

Critic was given the box by Clinton, the store manager and owner. It was a reasonably light, unbranded, half-full brown paper box. Judging by the weight of it I estimated I’d get maybe two or three plates worth of food, and the meal card said it was intended for four servings.

I got at least 6 meals out of this fuckin’ box.

Clinton provided me with a “West African Chowder”, which I was very curious about. I did not think that West Africa was renowned for their taste in chowder, but I guess I was wrong, because goddamn was it good. The meal was 100% organic, 100% plant-based, and the packaging was 0% plastic. The box was so granola I half expected it to start telling me about the latest Tame Impala release.

“It’s New Zealand’s first organic, gluten free, seasonal whole food plant-based meal box,” explained Clinton. But if you don’t care about all that stuff, don’t sweat it, because it’s just an all-round delicious meal. The small box was $40, which worked out to just under $9 a plate. That’s cheaper than a single pint on a night out. There’s a large box option too, if you’ve got more mouths to feed.

Taste Nature advertises it as “simple but delicious recipes for anyone on a budget”. Critic can confirm that yes, it was simple, and yes, it was delicious. The meal took about half an hour to cook, and most of that time was spent knocking back a beer while a pot steamed on the stove. Easy stuff.

Clean up was a breeze, too, because there weren’t any animal fats to get stuck to pans or other crap like that. And the packaging can be reused, recycled, or composted, like it never even existed.

$40 is a perfect birthday gift amount, or a good substitute for takeaway for two people. It seemed like a lot of money until I realized I’d spent just as much money at pint night and had little to show for it besides a hangover. $40 on West African chowder filled my fridge and belly for days, and made me feel very worldly.

Food like this tastes like your mum is proud of you. Food like this almost justifies drinking every other night of the week. Food like this is available in pre-boxed form from Taste Nature starting April 5. Bon Appétit muthafuckas.