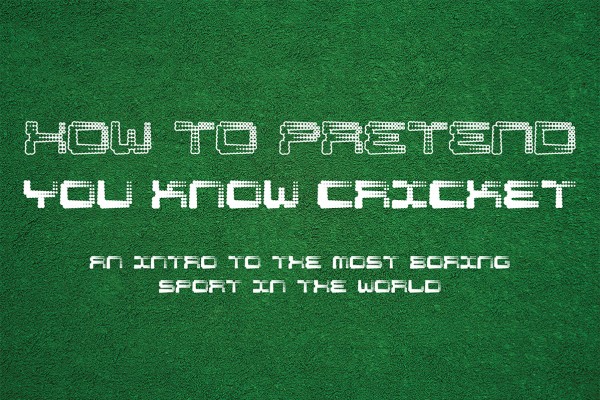 How to Pretend You Know Cricket

An intro to the most boring sport in the world

From deliveries to dismissals, dibbly-dobblers to golden ducks, cricket is an elaborate and perplexing way to waste your time. There are a lot of made-up words involved, like ‘inning’ and ‘wicket’ and ‘dilscoop.’ Aside from white men over the age of 50 and people who actually play cricket, most people watching a match (note: do not call it a game, or the Cricket Men will come for you) of cricket don’t know how the Duckworth-Lewis method works or how sundries are counted and it would take up the whole magazine if Critic tried to explain that. This article will give you the very basics of the cricket match, who to cheer for, and what to shout.

Like stoats, syphilis, and systematic racism, cricket in New Zealand is a product of British colonialism. It was first played in New Zealand in 1832 and is now our most popular summer sport. The way the 200-year-old white dudes played cricket is now known as Test Cricket. That’s one of three main formats alongside One-Day Internationals (ODIs) and Twenty20 (T20s).

Test Cricket is played over five days and matches often end in a draw. It’s slow, boring, everyone wears white, and it’s more of an endurance sport than anything else. Don’t bother trying to watch or understand Test Cricket.

The other two forms of the game are designed to be played within a day, with a certain number of “overs” in each “innings”. An over consists of 6 balls being bowled towards the batsmen and is used to measure the length of these games. There are two innings in these matches, the first innings with one team batting and one team bowling, and the second innings where they switch. An ODI match has 50 overs in each innings and a T20 match has 20 overs in each innings.

The Field & The Positions

The field is often referred to as the oval and has a 20-metre pitch in the middle where the ball is bowled. At either end of the pitch are the two wickets (also known as stumps), and three stumps (not the same as the previous stumps) underneath the wicket. A batsman stands in front of each one.

Each team has 11 players and at any point in the match one team will be batting and the other team will be fielding.

The referees are called umpires and wear a big white hat.

The batting team is easy to identify because there are only ever two batsmen playing and they both are trying to do the same thing — hit the ball with the bat, albeit not at the same time. The fielding team will have a bowler to bowl (throw) the ball, a wicket-keeper to stand behind the batsman to catch the ball if they don’t hit it, and then 10 other fielders scattered around doing fuck all until the ball comes near them.

You can think of a run as a point that you get every time you run from one end of the pitch to the other. If you smash the ball past the boundary of the field you automatically get four runs and you don’t even have to move. If you do it without the ball touching the ground you get six runs.

There are a lot of ways to get out but if the crowd gets loud and boomers start screaming “howzat?!” and the umpire raises one finger in the air, you know the batsman is out. Once you’re out, someone else from your team comes and replaces you. Once 10 people from your team are out, the innings are over and you switch with the other team.

Internationally: The Black Caps (men) and The White Ferns (women)

Topics to bring up: The 2021 Women’s Cricket World Cup, which will be hosted in Dunedin.

Topics to avoid: The 2019 Men’s World Cup. Will get you either a disappointed sigh or a 15-minute rant.