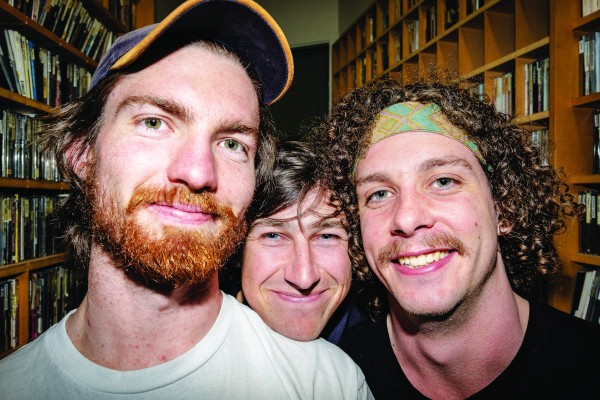 The band describes their formation as rising from the ashes of a band called the Shitz “which some of you may have listened to”. Shitz made a name for themselves with covers, and L Hotel has kept up that legacy. Early on, the band never really expected to get big, but as the Shitz gained popularity,  they thought “oh yeah, writing our own music would be cool”. L Hotel is made up of Borrie on Bass, Fred Richardson on drums, and Jono Everts on vocals and guitar.

Dave gives props to Jono, who is their modern-day John Lennon (presumably without the domestic abuse), in that he writes all their music. It started off with some jam seshes, but soon turned into proper gigs - four in total since the band began. The past four months have heavily involved the Snow Sports Club, and they played their first proper gig in a ski shack “in the middle of nowhere”. It’s ironic that the Snow Club and ski gigs play such a large role in their band, as it snowed while Critic interviewed him. With his Tuesday snow-day, Dave wanted nothing more than “to go up to Cardies and do a few bad voodoo laps of the park. Maybe break a bone. That would make my day.”

Dave’s favourite place he’s played a gig at as L Hotel would probably be at the Ski Club’s Dirtbag Ball. “It’s so hard to choose from all four gigs we’ve played,” but he reckons the crowd makes a gig, and they were “just frothing it”.

Covers make up a good portion of their tracklists because everyone loves a familiar tune, especially a box in and feeling it. But Dave reckons they never play a direct cover of a song,  “we tweak all of them. Even if that just means making it faster and louder.” He noted, though, that a good way to do well in Dunedin is just to play Bliss at the end of your set. “That always goes well.” Describing his favourite one to play, he gave a little preview; “I love, love, love our cover of Cupid's Chokehold. It’s the one that goes ‘take a look at my girlfriend, she's the only one I got…’ You know, that one. But we also got a cover of Desire, by Subfocus.” Borrie plays the bass in the drum and bass cover, but he says “I don’t actually do much in that song. Even my mum can’t hear what I play.”

L Hotel has recently released their “virgin” track, Sit Around, which can be found on Spotify. Dave said it “never gets old” seeing a photo of the three members on Spotify. According to a tag on Instagram, the song somehow reached “a random dad in Michigan”, which was “just so cool”. Dave has no idea how that connection happened, but is stoked nonetheless. “It’s crazy seeing something and saying ‘oh, wow, we made that’. And I’m just so proud of Jono and Fred for all they do.”

All three have been students. Fred is currently studying Stats, Jono has a Masters in Physics, and Dave has a Masters in Physical Geography. “Yeah, it feels pretty weird having completed a Masters, and now I’m in a band.” Fred and Jono both juggle music with employment. Dave said he handles the social media side of things “because I’m unemployed. So that leaves plenty of time to do dumb stuff. Like talking to Critic.”

Ultimately, Dave wants to have the same musical impact that bands like the Eric Simpson show band, The Tuts, and Steriogram have had on New Zealand. You can listen to L Hotel and their first single Sit Around on Spotify or at their next inevitable basement gig.