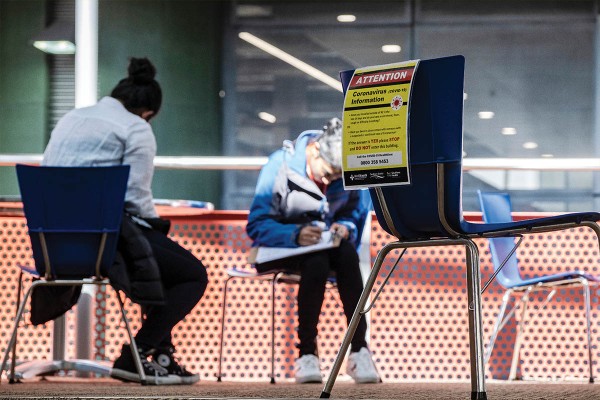 Students “In Limbo” Waiting for Covid-19 to Hit Campus

Otago Uni students’ perspectives on the virus and the institutional response

Otago students are “scared”, “concerned”, and “feel as if [their] whole lives are about to come toa stand-stil” over the recent Covid-19 outbreak.

Last Tuesday, students came together to celebrate St Patrick’s day in what many considered the final send for months to come. These celebrations went on despite crowds of 500 or more people being banned, recommendations for social distancing, and the University of Otago issuing a condemnation of student celebrations the evening before.

Instead of assuming that all students are thoughtless shitcunts, Critic hit the streets and asked students directly what they think about Covid-19, the hysteria, and the precautions they need to take.

For students Phoebe, Pippa, Camden, Claire and Sophie, the hysteria seemed to start off as a “joke”. They likened it to when Trump was elected as the U.S. President - it seemed funny, impossible, “and then it happened”.

One of the girls said that the situation felt “weird”, because suddenly they and their parents are no longer financially secure. “So many companies are being shut down, and my job is being closed. I don’t know what’s going to happen.” Another student said they were “kinda worried” about going home for Easter for their parents’ sake.

Sophie’s main concern is that she feels others can’t go home, or shouldn’t go home. “My flatmates are thinking about leaving, which is really emotional … I’m not concerned about catching it, and the disruption that comes with that, but I am worried about my grandparents.” Jenna, whose family is in Dunedin, is hesitant about even visiting. “I’m not concerned about [my health], but I am about theirs.”

Lucy is also concerned about her family’s health, and said “people not taking it seriously is fucking me off … when it’s at arm’s length, no one cares, but soon it’s gonna be right in front of our face.”

Both Sophie and Alex are on the brink of self-isolating. Sophie said “the unknown is really scary and it’d be good to know what the plan is.” Alex said “it feels like the life has gone out of uni.”

Mitch said he was concerned, but that because there is such an “awesome community” here that “I think it’ll be all good”. Daniel said the same thing, but added that “We are well prepared at this time. There is no need to overreact, but we should avoid ignorance … we can’t make calls out of fear and we can’t let fear dictate life.”

That being said, “it is easier to be ignorant,” Daniel said.

Some students, like Elliot, remain “unstressed” by the situation, although these students acknowledge that they are “not the target for the virus”.

Nevertheless, one student said “I can feel that something is coming, and that things are changing”. Lucy described it as being “like Limbo”.

Many students are “gutted” about Hyde being cancelled, and believe that it is hypocritical that social events are being condemned while uni is still running. Daisy “hopes” that uni will be cancelled soon. Ethan is “worried about keeping up” with studies if uni moves online, as “they’ve been talking about it in like every single lecture.” Lucy is scared that studies will be cancelled altogether.

As of writing this, the Ministry of Health has just banned indoor gatherings of 100 or more people. Schools, including tertiary institutions, are exempt. The hypocrisy is not lost on students, who said, “that is bullshit” and “how can the uni tell us not to party together, but won’t put our classes online so we don’t have to sit in spitting distance of like a dozen people?”