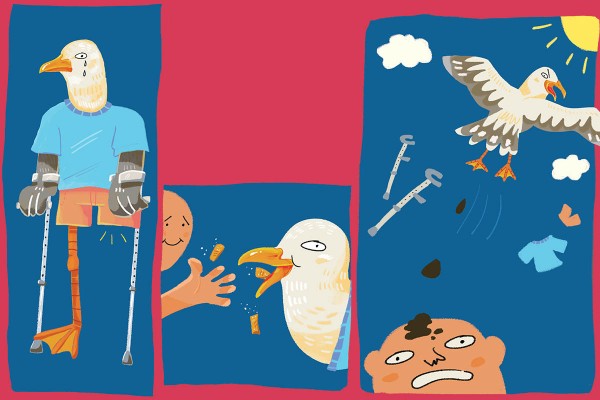 Seagulls, the resident shit cunts of almost every city in New Zealand. Despite interacting with them on a daily basis, there remains much unknown to the general public about them. How long can they fly? What are their intentions? Do they have a supportive father figure?

One of the biggest questions is, why do they stand on one leg all the time? Cursory Google searching revealed a potential reason, that it allows them to conserve body heat because they don’t have any feathers on their legs, reducing heat loss by half. Seems like a reasonable explanation, for a normal bird perhaps. For our resident assholes, however, I don’t believe it for a second.

Here’s the real deal: those little bastards do it for sympathy. Every time you walk past a bird with only one leg, what’s your first reaction? Pity. They know that we are weak and will use that to their advantage. Your human instinct to be the hero overpowers all rational thought, and although you may not know it, they’re wearing down your defences.

Slowly but surely, your evolutionarily programmed hatred towards them will wear down until they’re mere blips in your vision. Right where they want you. Then one day, you’ll be innocently walking through uni with some Squiddies chips in hand and that’s when they’ll strike. Armageddon has nothing on these rats of the sky as they channel their dinosaur ancestors, beady eyes trained on your snacks.

To survive their merciless tirade, your wits must always be about you. They dominate the land, sea, and sky, leaving no location safe from an attack. Fortunately, moving targets are harder to narrow down, giving you the highest chance of escape. Eating outside? Not on their watch. A single crumb falling on the ground and your lunch becomes ground zero.

It has been suggested that they communicate over long distances telepathically, as there is no other way they could gather at such speeds. Faster than you can blink, you’re surrounded by countless fluffy snack assassins. Their sharp beaks glinting, your fingers are nothing more than a slight intrusion onto a tasty morsel. Your food is the target. Your life is merely collateral damage. The only mode of survival is concealment, keep your food out of sight, move swiftly from one building to another. Never make eye contact, they can see your fear.

I thought it important to hear the other side and spoke to OUSA President Jack Manning. “Greedy capitalist pigs,” was all he was willing to provide at this point, which only strengthens my fear that this is beyond what we had feared. The administration knows, but they are in far too deep now to stop it. Dunedin’s Mayor, Aaron Hawkins declined to comment. His silence speaks volumes.

Now we get to the meat of the issue. Seagulls may not be operating independently, but rather part of a larger scheme against the people. Have you ever considered the fact that there are no seagulls in buildings? Only in the vast expanse of the outside world, somewhere that can be wandered free of charge. Now, what is in the buildings? Businesses. Places where people spend money, often at well-established food spots.

We are being violently herded inside in a flurry of pointy beaked barrages. Regardless of whether you brought your own food, you will be tempted to grab just a drink or bag of chips. Seagulls are vessels, prodding the general public inside to contribute to the backbreaking capitalist agenda. Agents of the bourgeoisie, masked with feathers and rage.

The question remains, why don’t we just kill the sneaky raptors and move on with our lives? Unfortunately, people have already had this idea and the seagull population in New Zealand has reduced by 80% in the past 30 years. The collective hatred of seagulls has been detrimental to our ecosystem and unlike more invasive animals (possums, cats, people, etc.), they are, unfortunately, vital to the environment.

One species, the Red Billed Gull, is more endangered than our beloved Albatrosses, the largest of the bois. They aren’t supposed to be eating our chips and attacking our snacks, most of them eat krill, a marine invertebrate. The increasing ocean temperatures are driving away the krill, forcing the seagulls to become the malicious sky rats that we know and despise. Their status as the villain is unwavering, but every bad guy has an origin story.

[Editor’s note: Critic’s official stance is that Seagulls are good boys deserving of chip and love. But all student opinion is welcome in this magazine.]