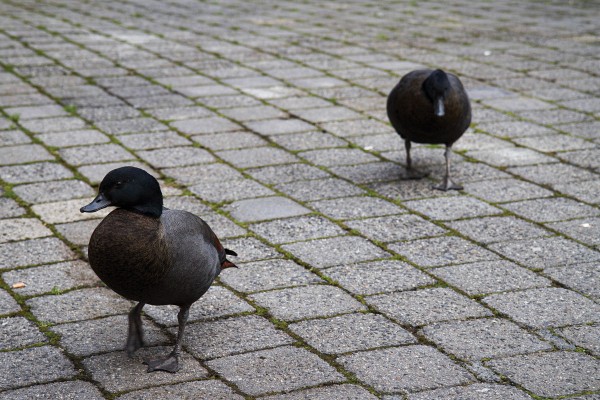 The gay paradise ducks that hang out on Union Lawn (fuck the heterosexual paradise ducks that live by the Leith) are inspirational. These good boys love to waddle around the food trucks, eat grass, and serve luuks. After months trying to book an interview, Samuel L Quackson and Quackie Chan sat down with Critic to chat about current events and their fashion icons.

Critic: What is your favourite fashion trend on campus?

Critic: So you’re under the impression that fashion trends on campus are derivative?

Critic: Wow. A very artistic take on what you think of fashion on campus. How do you go against the fashion norms then?

Critic: That’s fair enough, you guys are some of the most iconic fashion pioneers at Otago. So who are you wearing today?

Critic: We agree that fast-fashion is slowly corroding the fashion industry, but there is no need to abuse us like this.

Critic: Woah, I didn’t know we were bringing politics into this discussion. On that note, do you believe we should repeal VSM?

Critic: Interesting stance. Are you abstaining from answering the question due to your anti-establishment social positioning?

Critic: That changes everything. What are your thoughts on prison reform?

Critic: Yeah, I heard that Labour was a pretty vocal opposition at the time, too. Quackie, did you say you disagreed?

Critic: You’re right; maybe this isn’t the time or place. Let’s get back to the fashion chat. How did you create your own personal styles? A stylish mistake or a conscious decision?

Critic: Wow, what an answer. Let’s end on that powerful statement. Thank you for your time

Quackie Chan: [Tries to bite all of us.]