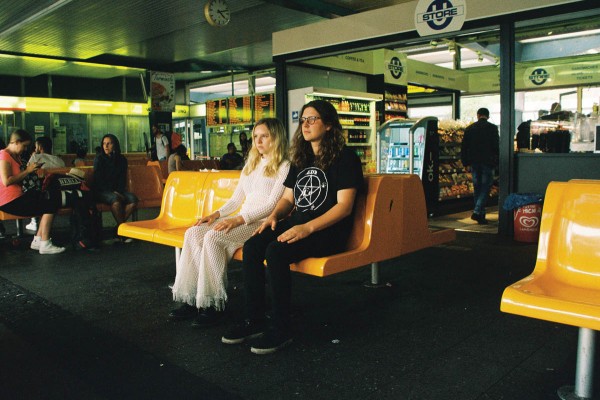 Wellington couple Gussie Larkin and Ezra Simons are heavy-psych band Earth Tongue. After touring much of Europe, shooting music videos in their Wellington living room and writing their album set for release this June, there is no sign of slowing down for the psychedelic fuzz duo. Critic sat down with Ezra last month ahead of their Dunedin show.

Inspired by the re-emergence of the proggy psych-rock movement, Gussie and Ezra spawned Earth Tongue two and a half years ago with the shared goal of travelling and playing live. All of this while working on their own projects, Mermaidens and Red Sky Blue. The biggest issue when forming the band was that Gussie and Ezra are both guitarists; Ezra had to quickly learn the drums. After two and a bit years, he still considers himself a newbie.

“We really don’t take this band too seriously, we want it to be more fun and immersive rather than trying to be deep and profound or whatever.”

Earth Tongue has hollowed themselves out a niche in New Zealand’s music scene, with an occult-psych sound. Citing their shared love for late ‘60s and ‘70s psych movements and Sabbath as key influences, Ezra describes their music as “loud, energetic and disorientating”.

They recently released their first music video, “The Well of Pristine Order,” a single off their upcoming album, combining colourful ‘tunnel vision’ shots they filmed through a glass tube with trippy hand-drawn animation.

“We shot the music video in our living room, over one day. Then I met this guy over in Berlin and showed him the footage I was working with. He had some animations lying around he’d been working on that he just gave to us. So yeah that's how it was created. I edited it when we were driving around on tour, so it was relatively thrown together.”

Their songs have an old and new age duality, drawing upon early psych movements of the ‘60s and space-age sci-fi visuals, something they say helps guide them when writing lyrics. Ezra stresses the importance of lyricism in crafting escapist music, saying imagery from old films, books or album covers provides regular inspiration.

“There's one book called “The Biological Power of UFOs” that I just found in an op shop, and it’s got so many really far out ideas. It’s from the early ‘70s; some trippo was just writing down all these crazy ideas about biological UFOs that can only be seen through infrared cameras and stuff like that, so yeah, we got a song from that book. Like I said, we’re not trying to change the world, just trying to have some fun.”

After spending the last few months travelling and living in Europe, Earth Tongue is full of praise for what’s currently cooking in the New Zealand music scene.

“I do think that the standard in New Zealand is super high. Bands here are real creative and don't really compromise what they want to do for commercial success. I think our isolation creates some really interesting bands that you don't necessarily see overseas.”

Earth Tongue are currently on their New Zealand tour and following the album release plan to head back over to Europe where their UK based label is hosting a festival. Ezra says they’ll likely come back to New Zealand at the end of the year to play some more shows.

Keep your eyes out for Earth Tongue’s new album coming this June. You can check out their current work on Spotify or Bandcamp.