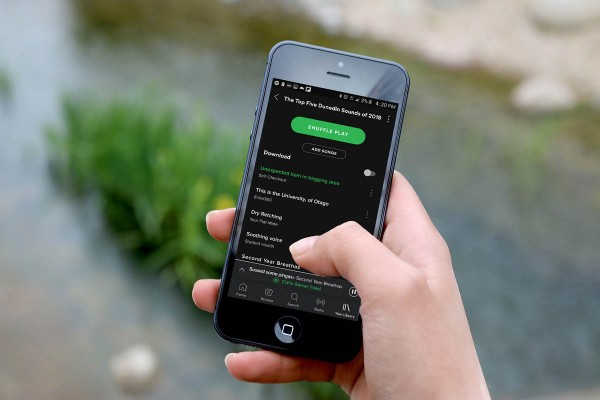 The Top Five Dunedin Sounds of 2018

Ah yes, the Dunedin sound. A pivotal part of Dunedin’s brand identity, as we are a town that is inclusive to all new bands (so long as you’re a male and play surf rock). It’s been a great year for the Dunners music scene. Ed Sheeran came to visit, Coyote defaced The Chills mural, and The Cook reopened its doors, we have seen so much drama and music arise in this new era of the Dunedin sound. I myself have participated in the odd gig or two here and there, and I gotta admit, there are some amazing bands and music coming out of Dunedin right now. So I thought what better way to send off this year with a final wrap-up of the top Dunedin Sounds of 2018.

5. The Self-Checkouts at Your Local New World

Giving Death Grips a run for its money, these machines can churn out tunes like no other. Although some people may be wary of the technical intervention happening with music nowadays, these machines are the next up and coming artist in the trap game. Although the beat and tempo are a bit off, the lyrics is where they thrive. How can you go past such recognizable classics as “unexpected item in the bagging area” or “item removed from bagging area, please return item to the bagging area before continuing”. I mean, how beautifully poetic are those phrases? Paired up with the tempo beeping of the other machines around you, alongside the discontent of the minimum wage worker having to deal with everyone’s machines breaking – it lends itself for a powerful, emotive experience.

4. “This is the University, of Otago”

This entry is a wee bit simpler than the others, but it doesn’t mean that it is any less powerful. Let’s paint the scene. It’s exam season, all of those times you ditched lectures to go to $3 lunch and dispensary has finally caught up on you. After looking past all the empty seats people have reserved with Yu Mei bags, you finally find a spot next to someone with a very bad cough. You are stressed, you need to start this grind, so you log onto blackboard and are greeted with the most soothing voice of all time.  The calming human yet semi-robotic tone becomes your light at the end of the tunnel, as he greets you with “this is the University, of Otago”. This transcends generations and has become an iconic staple in the Dunedin sound. Maybe it’s his peaceful tone, or the captivating pause between “university” and “of Otago,” but something resonates so hard with us all. Move over Hobo Johnson, there’s a new slam poet in town.

3. The Sound of Your Flat-Mate Dry Retching at 3am

This one truly is a party banger. No one sound captures having such a good time than the sound of someone vomming right next to your room. Usually this sound isn’t the actual part people enjoy, but rather the build up. We can most likely assume that the opening acts were along the line of your friends getting fucked up, listening to some Kendrick and debating if they can say the N word (side note, if you’re white: no), and funneling a few too many cruisers to make your blood sugar rise. After a long stint on Castle where you refused to talk to your library crush in person, you decide it’s time to get a kebab or Night n Day and mish it home. And then the climax hits. It starts with the sound of running footsteps, followed by an overly aggressive slam, followed by the most awkward and uncomfortable four minutes of dry retching. You’ll laugh, you’ll cry, you’ll feel everything you’ve never wanted to feel at once, hearing your flat-mate in agonizing pain. This Dunedin sound is truly a representation of taking our place in the world, through our normalized binge drinking culture.

This is one of the most emotional Dunedin Sounds – the soothing voice before the impending storm of not being able to book an appointment until 2020. The vocals on this are exquisite, capturing such sincerity and emotion at the same time. The calming vocals guide you into a serene experience, followed most likely by some Bic Runga as the hold music. The angelic and melodic tone creates an overall sensory experience, one that takes away from the anxiety of having to call someone up on the phone and book an appointment. As she guides you through the various options, you can’t help but get entranced by her voice and tone. She is gentle and kind, yet can still assert herself as a dominant player in the Dunedin Sound scape. She is who I want to be. She treats life with such compassion and empathy, something that places her in this chart.

In all honestly, this is what the Dunedin sound has turned into. BCom by day, DJ by late arvo. With the perfectly curated Spotify playlist (before turning it down to mute the ads) blasting out of the UE Boom, what more could you really want. These breathas don’t care what you think, they’re only here for a good time while tryna suss some pingas. These wannabe DJs know their audience and can really get the crowd pumping through some Lil Pump, Macky Gee and XXXTentacion. They don’t care if these artists are terrible people, they just want to create the vibes. I mean, when is it not the perfect time for some obnoxiously loud DnB while reminiscing about how fucked you were at Courtchella? As the music remains the same, time passes as a mere illusion. You get so caught up in all the misogyny and terrible rapping that you forget to go to your 6 o’clock ECON112 tute (after you have to resit the paper for failing first year). We see these breatha’s going places. They are going to move past their ventures to Leith Liqour to conquer the dance floor at Mac. They own their turf, and they aren’t afraid to exert their dominance by rising up the charts. With enough Barkers track pants to go around, and more shitty rap remixes pumped out on the daily - they truly embody the new Dunedin sound.

In all seriousness, there are heaps of cool bands popping up in Dunedin. Be sure to scope out other venues than U-Bar such as The Attic, The Cook, and even (can’t believe I’m saying it) The Crown to hear some tuneage. Here’s a small compilation of great bands and artists coming out of Dunedin to check out:

(also listen to more of my terrible opinions on Radio One on Thursdays 4 – 7, otherwise, fight me) xx