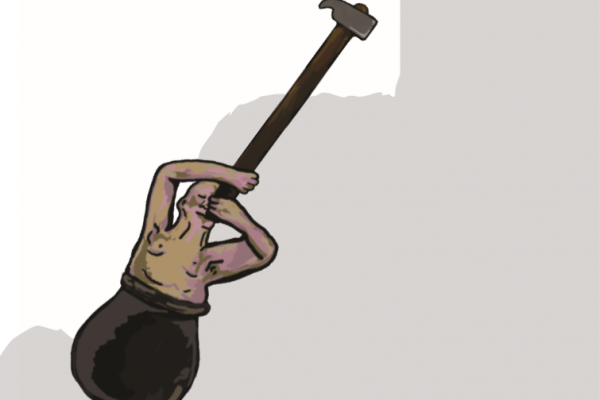 Video Game Review: Getting Over It, With Bennett Foddy

“Why are you bothering to play this game?” Geoffrey the gaming gorilla said to me. “Isn’t it obvious that – especially for a game that has exclusively stolen assets – you’re not supposed to want to play this? Is irony completely beyond you? Do you know how many levels of irony I’m on?”

“No,” I replied, “and that’s what both annoys me and really intrigues me about this game. It actively hates its players. It says, right at the start, that it wants to hurt the kind of person that would want to play it. It has just about the worst gameplay that I’ve seen in a PC game. The main character is a naked man in a cauldron moving himself around by wildly swinging a sledgehammer, for God’s sake. The controls are just awkward enough that even pausing and unpausing the game with the wrong timing can completely screw up your progress. But it’s still weirdly compelling.”

“You’re exactly the market audience, then. Dumbass.” Geoffrey smirked self-confidently before absent-mindedly scratching his balls. “I’m gonna show this game to all your friends, just to watch them get angry at trying to play and at that one stupid arbitrary jump scare. That’s all this game is good for.”

I looked at Geoffrey, trying to understand why he felt this way. “The progress that you can make in the game is kind of its own reward. Even though you’re just climbing a pile of garbage while gravity very deliberately works against you, finding new areas for their own sake is, in a weird way, beautiful.”

“Aha, so you’ve fallen into the Stockholm Syndrome trap!” Geoffrey spat into a nearby bucket, as if to express his simultaneous glee and disgust at the opportunity of talking to someone who disagreed with his opinion. “The biggest flaw in the consumer cult of ‘hard games’ is how easy it is to make a game superficially difficult! Just design the game really badly, and you’ve got a hard game! Bring on the blogger thinkpieces, bring on the comparisons to Dark Souls, and bring on the YouTube ad revenue!”

I feared I wouldn’t be able to get the gorilla to listen to me. “I mean, that’s one part of it, but the actual narrator of the game – not you, the character that I’ve invented for this review, but Bennett Foddy himself – tries to gently encourage you the whole time that you’re playing. If you lose a lot of progress, he either apologises to you or reads you a motivational quote from a famous author while calming jazz music plays. The more progress you make, the more thoughts he gives on game design and poetry about life. He outright says that, when he played a part of his own game that he thought was too difficult, he couldn’t bring himself to change it, because it might lessen the message of the game. It’s an experience that leads you from frustration to trying to understand why he made it this way.”

“What is your problem, idiot? I don’t have the patience to play shit games, let alone think about them!” Geoffrey’s face turned redder and redder, his fists clenching as though he was barely restraining himself from punching me. “It’s a game that makes fun of bad games, and it achieves that by being a bad game! Any criticism you have of it can be explained away by saying that it was supposed to be bad! You have no power here!”

“Exactly,” I said, “so I’m trying to find meaning in it based on my own experience of it. And, even though it was difficult in a very lazy way, I really enjoyed the time I spent playing it. It’s a good reminder that failure is sometimes okay, and that you can eventually succeed at a task if you have the wherewithal to get up and try again.”

“YOU CAN’T SAY THAT!” Geoffrey belched, tearing his hair out. “BENNETT FODDY IS THE DESIGNER OF QWOP, SO IT MUST BE BAD! I WANT PEOPLE TO KNOW IF A GAME IS SHIT, THAT WAY THEY’LL BE ABLE TO LAUGH AT IT!”

“Games don’t have to be viscerally fun for you to get something out of them, you know,” I said, at which point Geoffrey’s head violently exploded.