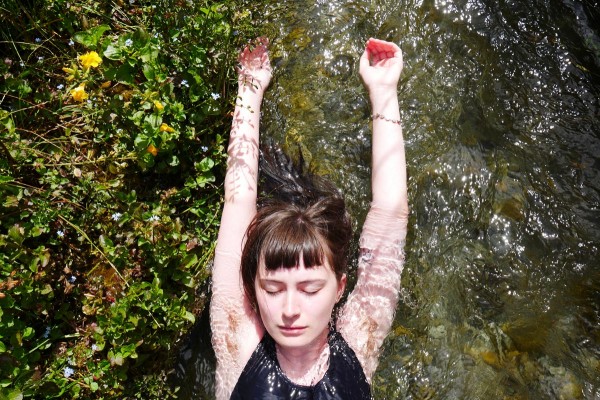 Millie Lovelock on Her New Single, 'Beneath the Visible Surface'

She’s been gigging since she was 16. She’s an academic and a writer. She did her dissertation on One Direction and her thesis on Djuna Barnes. And some might say she’s one of the ultimate queens of the Dunedin music scene. Millie Lovelock won’t stop making music.

With 11 singles and four albums in total already released (between Astro Children, Trick Mammoth and Repulsive Woman), she’s just dropped another, unintentionally making us all realise what wastes we are.

‘Beneath the Visible Surface’ is the haunting second single of the album Turnpike. It was recorded in 2016 in Auckland with Jonathan Pearce. Millie and Isaac Hickey spent about two weeks recording, “probably the longest time we’ve spent recording somewhere ever”.

Through sleeping in the studio on the concrete floor dosed up on painkillers with a sinus infection, then flushing her phone down the toilet (sober), Millie and Isaac came out of the ordeal with a fresh album, quite unlike anything else they’d ever recorded.

“Jonathan played a lot of the album,” Millie says, “he’s a keys player, and he did the synth. He wrote this really amazing part in the bridge so it ends up having this contrapuntal motion. It’s very different to our older stuff. A couple of the tracks are a bit older but the rest of them I wrote over a couple of months in 2016. It was all made close together and I’d never really done that before. I was writing it when I was getting into Strauss so that was quite an influence at the time.”

Isaac and Millie recorded their first EP in 2012, and released the songs on Myspace. Millie began her music evolution playing in Rock Quest at an early age. Through the Chicks Project (which is now the AMPED Music Project), she went on to play big kid shows with Isaac, and used her time to learn and polish her craft. Despite playing in a few other bands such as Trick Mammoth, Astro Children has always stuck together.

“Isaac and I have known each other for an inconceivably long amount of time. At university we were playing gigs about three times a week. It was exhausting, but no regrets.”

Hearing Millie talk about her single reveals just how much work goes in to one piece of music. 3:32 minutes long, the song is overflowing with creative complexity.

Strauss’ symphonic poems are an influence. “I hate Lord Byron,” Millie grinned, “but it’s an amazing symphonic poem. It has such sweet sounding sections which descend into dark and stormy areas”. It’s also subconsciously inspired by a track from My Chemical Romance.

“‘Beneath the Visible Surface’ was also the title of my honours dissertation. It’s followed me around. There’s a lot of Barnes on the album in general to be honest, it [Nightwood] is one of the few books I’ve read over five or six times.”

“It’s not melodic, it’s harmonic, the chords are really strange. And the vocal part is more of a harmony than a melody. We had to re-tune an analogue synthesiser because the notes I was singing weren’t in the chord, if it was slightly wrong everything was really out of tune so we spent forever delicately tuning. The vocals we had to do line by line, and there were a lot of run-on lines. It’s probably the most complicated piece of music I’ve made.”

I couldn’t resist asking for a few words about her experience as a woman in the music industry, a question that’s apparently, stupidly, gotten Millie in a lot of hot water.

“When I was a teenager I kind of thought I could be a musician and ignore the fact that I’m a woman and everyone else would too. I thought I could just establish myself and have the same amount of respect as my male peers and then you start to go through a process of disenchantment. And I’m a white woman so I’m already higher up the ladder than most and that’s pretty disheartening to know that if I’m having a bad time there are people having a worse time.”

Yet despite this, she won’t stop. She can’t.

“I think some of the best musicians in NZ are women and always have been.”

Try Lucy Hunter (“her vocals are out of this world. I can’t believe a voice like hers exists”), Emily Littler from Street Chant (“I’ve known about Street Chant since I was a teenager, it was a huge influence on me to see powerful women on stage like that”), and obviously Aldous Harding, Lorde and Chelsea Jade are just knocking it out of the ballpark.

“It’s a relief to know there are so many amazing women in Dunedin alone making music.”

There’s no control over what people write about you, and how they review your art. Millie received a lot of criticism from an early, fairly vulnerable age. People wrote about their own ideas of the personas she puts on in the different bands she’s played, and she says that was quite hard.

In the new record her vocals are quite different, at the bottom of her vocal range.

“It was really hard. I can get down there but it takes a bit of energy. I sing a lot more on this record.”

‘Beneath the Visible Surface’ is available on Bandcamp. In April, Astro Children are playing at the Cook, and in the future they're hoping to do a New Zealand tour, then an international tour.

Without a doubt, these are exciting times for women in music.