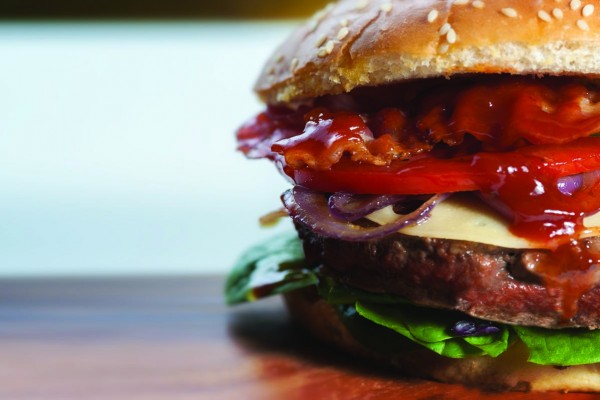 Saturday of O-Week was a big one, and the flatties and me were back at the flat after a beer or 20 craving a feed. Obviously, a kebab would’ve been ideal but the old wallet had taken a pounding over the past couple of weeks, so I had to improvise. I opened up the fridge to a pack of mince earmarked for a flat dinner and saw endless opportunities, because mince is the MVP of versatile meats. I made the executive decision that burgers were the option, and naturally the boyos were stoked. This is so incredibly easy that I was able to put it together after ten beers and half a goon.

1 . Chuck the mince in a bowl (make sure it’s defrosted; if you’re slow enough not to know that’s crucial, then probably just get someone else to cook for you).

2. To bind the mixture, add a couple eggs and a whole bunch of flour. Don’t ask how much, it changes every time with me, but basically you want to be able to squish it into patties with your hands without it being all slimy. Tip: Wet your hands before squishing the patties to stop the mixture from sticking to your hands.

3. At this point you can also choose to flavour the patties in various ways. Obviously, always pour in some salt and pepper; go hard on this or they won’t be nearly as good. Some reliable combos I’ve run in the past are a cumin, chilli and paprika operation, and a garlic and mixed herb option. On Saturday I was too drunk to care so just went with salt and pepper and it worked out fine. Some people add chopped onion – dont. The chunks will make your patty fall apart.

4. From here just give it a solid mix then squish it into patties with your hands. To cook them just get a pan nice and hot, pour a generous amount of canola oil (don’t use olive oil – the low smoke point will set off your alarm), then chuck the patties in to start frying. From here just keep an eye on them, it’s about as easy as passing first year commerce. You want them cooked on both sides and in the middle without burning them – but don’t press them down with the back of the spatula, you’re just squeezing out the good juicy stuff.

5. Chuck them in some bread – at the flat we didn’t have buns so I pulled out some trusty one dollar Couplands multigrain instead. I then went with barbecue sauce, mayo, cheese, tomato, red onion and lettuce, which went down a treat. Burgers are about as reliable as Japanese cars, the missionary position and Southern Gold, hence why they’re always a great option for a feed.

Disclaimer: Don’t drink and fry, unless you have a sober supervisor.