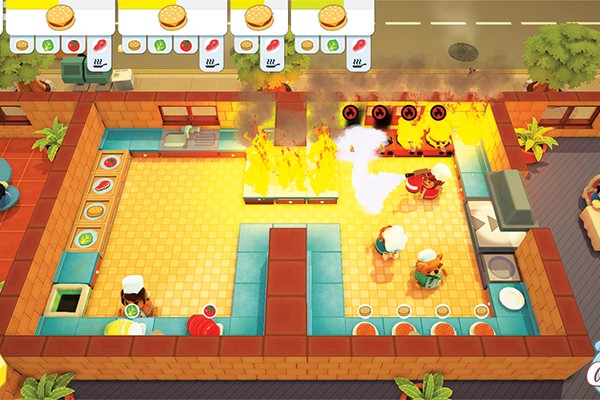 The Great Gaming Experiences of 2017

For the last issue of 2017, I really wanted to highlight the magical parts of gaming. Those experiences that stick with you forever, that make for awesome stories at parties, that you remember with fond nostalgia, and that can bring you to tears. These parts of gaming are what make me keep playing. I care about the experience; the emotional impact it has on me and my friends. I turned to Twitter, as it has a huge community of game developers, as well as my own workmates, and asked what their favourite gaming moments of 2017 were, to extract more of these feelings and give us some warm fuzzies to end the academic year with. I guess you can think of these as micro reviews; a short and snappy look at 2017 (so far) in games.

“Being deeply comforted about my place in the world by Everything! I got my mum to play it and she loved it too” - @ShoehornwTeeth

“Finished Dark Souls DLC with a friend in Iceland, the series was over forever but i’d shared a truly beautiful journey with him” - @HandShandicoot

“Playing Overcooked with a good friend. We got through the main story without failing a level. We had a great time all around. Until we reached the final boss...

Playing the final level was a disaster. The world ended, and it was our fault. Bad chefs. We silently exited the game and turned off the PS4. We hardly spoke of this embarrassing loss, and dreaded trying again, least one of us beat the other to death with a dual shock controller.

A few days later, after a few beers, we trepidatiously opened Overcooked, and tried again. But we had a plan! The initial try would be a test run, where we figured out the best strategy and who would do what. It was rough; the kitchen was constantly on fire and we lost badly. But we restarted the level with confidence and a solid plan.

The first stage finished. We were 50 seconds faster! The second stage finished. We now were 1 minute 30 ahead of the previous run. A bit off, but we thought that maybe it was still doable. The third stage complete and we had just under 3 minutes left! We had no idea how long the final stage was going to take!

The final stage had us making everything. With a minute left, a part of the kitchen burst into flames, but we just ignored it. The world was at stake goddamit. All that was left was to build a burger, and finally a healthy salad. With half the kitchen engulfed in flames we screamed at each other as we threw the salad down the boss’s throat and won with 14 seconds left!

Oh shit, that was way too long. ‘Overcooked was rad’.”

“Playing Civ 6 with my flatmates! I was on a small continent all by myself and somehow for the whole game no other players found me? So I had a bunch of great resources, money and space, plus nobody could spy or go to war with me etc. However, I was trying to win culture victory (for the first time), and I had a lot of great works, but I only had two tourists, oops (which you need to win, I figured out too late). Also the Gandhi AI glitched out and he declared war on me, despite never meeting me.”

“In Rimworld, there was an electrical explosion in my indoor farm which burned most of my animals alive, but one of my bulls survived with partial deafness, pain in his legs, and brain damage. The brain damage gave him the ‘trauma savant’ perk which increased his manipulation significantly.”

“Discovering the Korok Forest in Breath of the Wild. After really struggling through the game, stumbling on this area was an absolute comfort and nostalgia throwback as I was wrapped in blankets with snow falling outside, I really felt that deep sense of wonder and childlike awe I used to feel when I was younger playing Zelda games.”