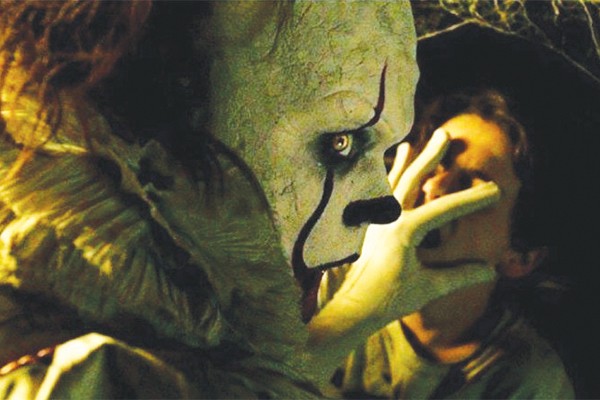 While not as scary as many people were suggesting, I wouldn’t recommend IT to anyone already suffering from Coulrophobia. This is the second adaptation of Stephen King’s 1986 novel to be put to screen, following the 1990 mini-series. Director Andy Muschietti has revamped Pennywise the clown, bringing him back to creep out a new generation of film-goers. The film has a very nostalgic ‘80s feel both in its setting and its storytelling, very similar to Stranger Things.

IT is set in Derry, an archetypal American small town where the nerdy kids are bullied by bigger kids with mullets. We follow Bill and the self-proclaimed “losers club” as they deal both with real life issues and being terrorised by Pennywise, who is played excellently by Bill Skarsgård. The film does a great job at mixing comedy and horror, which is helped a lot by Stranger Things star Finn Wolfhard. His performance as Richie is one of the best of the movie with some great, crude one-liners. The whole cast of kid actors are really impressive in some very demanding roles. They are at the centre of the film and it was vital that the chemistry between them was convincing, which it was.

The comedic and light-hearted moments meant that the film often let the audience off the hook, allowing them to take a breather from the horror scenes. This can either be viewed as a good or a bad thing; I thought it was pulled off superbly and was well suited to the story. Some people might be disappointed, expecting something that would leave them psychologically disturbed. It’s unlikely to achieve that level or horror, as it is relatively tame with a few very well executed jump scares. I would recommend you see with a group of friends on the big screen.