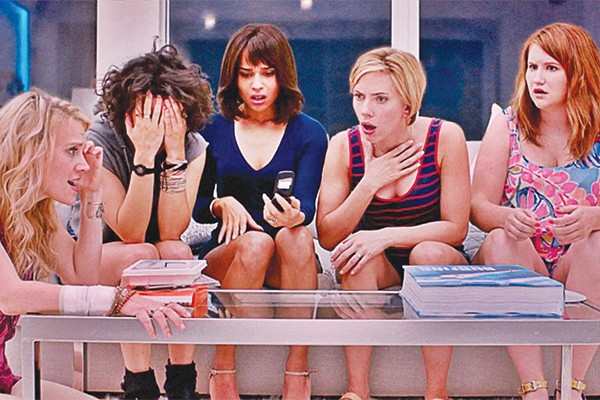 Amped for a kick-ass, unabashedly feminist film about a bunch of fierce yet comic women fighting the good fight, I have to say I was disappointed. Wonder Woman was sold out. Instead I was ushered into a nearly empty cinema to see Lucia Aniello’s “Rough Night”. In a slightly unhinged comedy that brings new, ludicrous plot twists around every corner, Scarjo and an ensemble cast scramble to cover up the manslaughter of a stripper, hired to entertain their bachelorette weekend. The film features copious amounts of alcohol, drug use, cringe-worthy jokes and ladies behaving badly.

Nostalgic for the good ol’ college days, the film follows a group of friends as they bond again after years apart, making plans to avoid the authorities as Scarjo’s character’s fiancé and counterpart stag do crew undertake an equally hilarious journey to win back the woman of his dreams. Like many, I’ll see pretty much anything featuring Scarlett Johansson, but if you want to save yourself ten dollars, you can watch all the best bits in the clips already released on Youtube. However, I was surprised at how disarmingly fleshed out and likable each of the characters were; there’s probably a Buzzfeed quiz that likens you to one of them.

This film brought up some very real gender inequality arguments, but if you’re just there to have a good time, never fear; there’re plenty of obscene jokes and, what we all want as the backbone of any film, an actual plot. While a standard formula, what makes this a fresh story is the attention to the backstory of each character, investing the audience in the group until we are rooting for the team to get away with murder. Rough Night isn’t mindblowing, but it wasn’t the worst film I’ve seen this year.