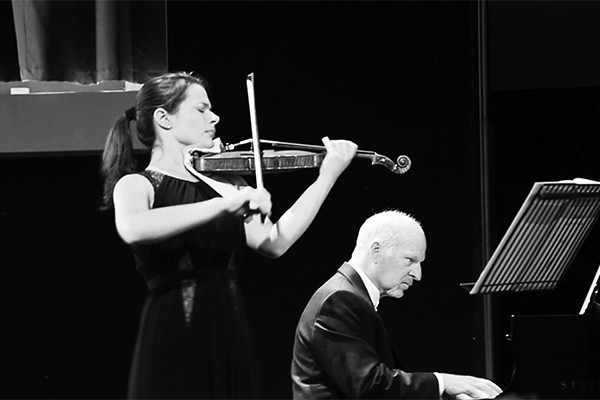 There’s nothing quite like live chamber music. I’m not just saying that because I don’t have tickets to Ed Sheeran. There’s something magical about seeing two or more instrumentalists in musical conversation. I can’t think of a better example of this than Beethoven’s sonatas for violin and piano. As for our two musicians of the evening… they’re some of the best you’ll ever hear.

When I was 12, I went with one of my best friends to see a 22-year-old Bella Hristova performing Sibelius’s Violin Concerto. We were both violinists, and we were both completely mind-blown. My friend turned to me afterwards and said, “wow, we’ve only got 10 years to be as good as that!”

9 years on… yeah-nah, probably not happening. Hristova is a world-class violinist who calls Aotearoa her favourite country, and we’re very lucky to have her here again. I’m also particularly excited about this evening’s pianist; the man whose Beethoven sonatas I’ve had on recording for as long as I can remember. Timaru-born Michael Houstoun has also made his name on the international stage, particularly as an interpreter of Beethoven. When my mum found out I had a ticket to see these two legends performing together, she practically apparated to Dunedin (someone else I hadn’t seen in a while!).

The evening began with Beethoven’s 5th sonata, “Spring”. You know... that piece massacred by so many wee students that the violin teachers in the audience were probably battling PTSD. The audience certainly felt on edge as we anticipated the famous opening melody, and I’m sure Hristova and Houstoun were aware of that. The duo mastered the balance between familiarity and surprise. Each statement of the theme felt new, yet resonated with the same heartfelt gaiety that gives the sonata its appeal. What also struck me was Hristova’s immense control over the bow. Her ability to produce the warmest tone from the slowest bow-stroke, and sustain it, is simply incredible.

They followed on with a sonata I’d never heard before, but am now head-over-heels in love with. The 6th Sonata in A major is as graceful as its predecessor, but with a charming simplicity we don’t often associate with Beethoven. The difficulty of the piano part warrants a mention. Listening to Michael Houstoun’s left-hand scales, I couldn’t help but think, “that very hand has toured New Zealand playing Ravel’s left-handed Concerto”. The showmanship of each musician came to the fore in the final movement. My new favourite, Theme & Variations, juxtaposes elegance, humour, and a pinch of rage. Amidst technical challenges, Hristova and Houstoun managed to exploit the stark changes in the character of the movement, making for my favourite performance of the evening.

Beethoven’s 10th and final sonata foreshadows many of the “heroic” compositional traits which would redefine western art music. So much elaborate storytelling is extrapolated from a simple ornamental motif. It’s absolutely riddled with enough plot-twists to make Scorsese proud. I was in awe of how easily the two musicians facilitated such a difficult, expansive work.

Every subtle change of tone or gesture in phrasing that one musician made, the other musician was able to respond and adapt to. That, in its essence, is what world-class music making is. When two or more people share the same attitude, the same humour, the same passion for music, and manage to convey it to each-other.

And that is why there’s nothing quite like live chamber music.