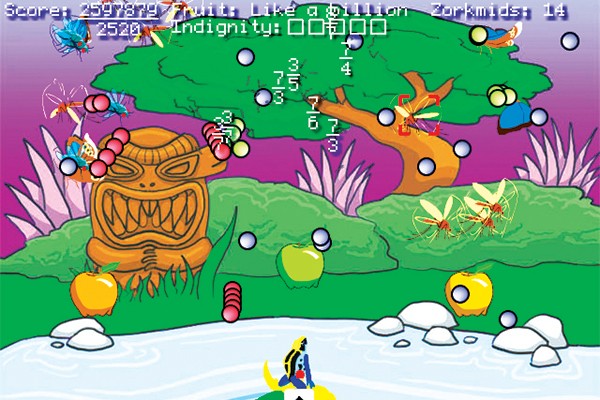 Miniclip and Neopets were the only experiences I ever really had with browser based games made in Flash and as it turns out, I’m missing out on a lot.

My mate Jack: “Lisa, have you played Frog Fractions?”

This was the beginning of my adventure into the abyss of what I thought was to be another wild edutainment game, like Zoombinis. Zoombinis made me appreciate math and logic, would Frog Fractions do the same and make me love fractions? No, but it would do so much more. Frog Fractions was released in 2012 and created by a guy called Jim, so I’m pretty late to the party, but the experience was so unique and surreal and inspiring, I have to write about it.

My mate Jack: “Legit you should play it. It's just a browser game, no maths involved, takes like 10 min maybe? You want to get the Dragon and then fly around.”

Me: “Hahahahha ok, I’m not learning much about fractions, I love it.”

There are no fractions involved in this game, except for your score at the top. But there is a frog. Your little frog friend hangs out on a lilypad in a pond and you control them by moving them horizontally on the screen and control its wee tongue to catch flies. You get power ups based on your score which increases from the amount of bugs and apples you eat (I think??). Your score acts as a currency to buy the power ups. But that’s not really the point. Once you can afford the dragon power up, everything changes.

My mate Jack: “Oh wait no go underwater. Haha. Opposite of what I said.”

And so I did. An underwater journey on the back of my dragon friend. Mysterious, eerie and wonderful. This was when I realised I was in for an odd experience. My currency reached an extremely high.

My mate Jack: “Get the warp drive tho when you can afford it. And strap urself in matie.”

Me: “Omg warp drive is happening.”

Then I ascended into space. Yes. Space.

Then there’s a hilarious court trial which I do not want to spoil. Eventually I made it to the text based adventure, which is where my journey ended; without a walkthrough, I have absolutely no clue how to do it.

I really value these games and experiences. They sound ridiculous, but the subversive style of presenting as a particular genre of game, and then blowing that out of the water, is fantastic. Frog Fractions pulls apart the expectations of genre and gameplay and completely messes with them. Games are systems of rules to be tested and without complete subversion new genres, mechanics and stories would not be encouraged. Browser based flash games are the best platform for subversion; they are easily accessible for players and developers. Even though Frog Fractions is a very unique, niche experience, I highly recommend it to anyone who wants to continuously say “whaaaaaa” during a playthrough experience. Also a frog flying on a dragon is an amazing experience in itself.