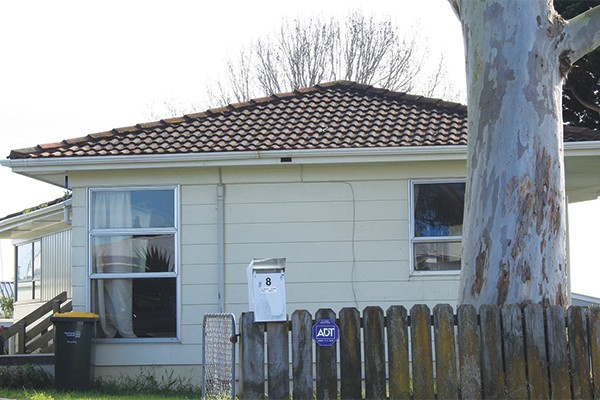 In 2016 Daniel and I moved back to New Zealand to have our son. We moved into my childhood home with my parents, who live in a state house in an area which has increasingly become less comfortable. I remember the big move when I was 3 years old. My parents knew the neighbours who bought the house across the street; we helped to varnish their floors. Most of the land was still grass and all the families had children of similar ages so the streets were always full of friends. This familiarity is no longer present; police cars and domestic violence are common down our street. Recently, like a handful of families we know, and after what has been 28 years in a state house, my parents received a letter stating they no longer meet the requirements for state-funded housing.

In January 2017, 8 Cole Place was vacated. At one time there were three generations living there. The land is now being redeveloped to fit three dwellings on the one site and has a family living there temporarily until September. It has been a nervous path navigating outside of the social housing structures, for some in our whanau group, resettling in Australia became a more practical option.

We have created performative video portraits on government purchased land for social housing. The work uses indigenous methodologies, incorporating traditional grass dancing from Daniel’s culture (Lakota, Sioux), and as he moves through the landscape each step is considered a prayer for the whenua and people. Historically a Grass Dancer flattened grass areas for Tipi, but in this context the redevelopment of the land is unwelcome and his movements offer a form of passive resistance.

Cora-Allan Wickliffe (Ngapuhi, Tainui, Alofi and Liku) is a multidisciplinary artist of Māori and Niue descent, originally from Waitakere. Her work often explores and examines the constructed identities of indigenous people.

Washington. His family relocated for a year to the Coeur D’alene Indian Reservation in Plummer, Idaho. His late father, Richard Twiss, was the co- founder of the Wiconi organisation and was a Professor of Native American Studies at Portland State University. Under his influence Daniel took up Grass Dancing and joined the International Dancing our Prayers Tour in 2003. Since then he has attended and danced at numerous indigenous gatherings and conferences.