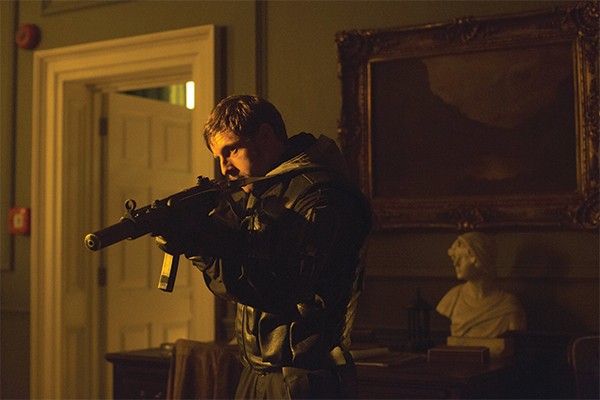 6 Days tells the true story of the 1980 siege of the Iranian Embassy in London. The embassy was stormed by six individuals, who held 26 people hostage for six days. The film follows police negotiator Max Vernon (Mark Strong), who aims to resolve the situation diplomatically and peaceably, and an SAS troop (including

Jamie Bell) who plan an armed assault on the embassy. We get some wider context of the implications of either course of action, and some political background as to what is happening.

The film is a co-production between the UK and New Zealand; it was scripted and directed by New Zealanders and partially filmed in Auckland, and the supporting cast are a mixture of Brits and Kiwis. The finished product does somehow have the feel of a Kiwi film; possibly it’s the economical use of a fairly small cast and few locations. This is not a bad thing, although the absence of crowd scenes or scenes involving the general public stood out a bit. And since it’s about a well-known event that happened in Britain, the kiwi-ness can feel slightly strange and distracting. Imagine watching a biopic about Split Enz that was filmed in Barnsley and directed by Danny Boyle, starring Rowan Atkinson and Gary Oldman as the Finn Brothers (actually what am I saying, that movie would be awesome).

The film is certainly skilfully made and suspenseful, and holds the viewer’s attention. Dramas about historical events generally fall into two categories for me: those that immerse you fully in the events so that you forget it’s ‘history’ and those where you’re conscious of the fact that it’s a re-enactment. I think 6 Days falls somewhere in between the two, but overall it’s a well-made, well-acted thriller that is worth a watch.